Elknot is a notorious DDoS botnet family which runs on both Linux and Windows platforms [1] [2] [3] [4]. Multiple variants have been found since its first appearance, while the most infamous variant is called BillGates by many researchers because of its characteristic use of Bill and Gates modules [5]. Besides that this variant is also highlighted in using the school-book style of RSA encryption to hide its C2 configurations including server, port, campaign name, etc. The plain configuration is made up of one or more C2 lines, with each line having the format of "< C2 ip or domain >:< C2 port >:< Is Listener ?>: < IsService ?>: < Campaign Name >:< Enable Backdoor ?> "[6].

In September 2015, we found a new elknot/BillGates variant which uses a new C2 encryption scheme while keeps the old DDoS attack functions and C&C protocols.

This article will discuss the new elknot/BillGates variant with a focus on the updates from the previous one. The analysis work is mainly based on the following 2 samples:

In the previous version of Elknot/BillGates samples RSA cipher text and parameters are stored in hex format string, which can be easily extracted with Linux utility like strings. To get the further plain C2 information what you need to do is just inputting the extracted cipher text to a RSA decryption tool which can be easily obtained on Internet. Since it’s not this article’s emphasis so we skip it. We have developed such a C2 extraction solution which works well on all collected BillGates samples.

Our inference was soon confirmed after some Bindiff and dynamic tracing work was done. A new Elknot/BillGates variant did emerge. The fake C2 servers, aka fk.appledoesnt.com and 115.231.218.64, will be replaced by the true C2’s hidden by the new encryption scheme after sample runs. This explained why they could not be successfully contacted.

Further analysis shows that the new encryption scheme composes of 2 functions, which are renamed as DecryptC2Cfg and Decrypt. The entry function (aka DecryptC2Cfg) is called by CSysTool::Ikdfu94, which is responsible for decrypting the C2 configuration in old version. The following figure shows the difference between new version (the left code snippet, md5=2579aa65a28c32778790ec1c673abc49) and the old one (the right code snippet, md5=8285f35183f0341b8dfe425b7348411d) in function CSysTool::Ikdfu94.

It is interesting that DecryptC2Cfg will not directly return to the calling place but jump to CUtility::Split, which indicates that the decryption code is inserted by some 3rd builder after the sample is compiled. If you look at the old version code, as shown in the right snippet of Figure 2, CUtility::Split is function that should be called at 0x8077AB4. The jump to CUtility::Split exactly accomplishes the object of replacing the fake C2 information decrypted by RSA while not interrupting the original execution flow. Other evidences for the above speculation are as follows:
1, the common shellcode technique of “call $+5” is used in DecryptC2Cfg for address locating.
2, the 2 decryption functions were both stripped, while it’s not true for all the other functions.

The Decrypt function is illustrated in Figure 4. It has a fixed cipher text (0x40 here). The core operation is getting each plain byte by XORing current byte with its next neighboring one. 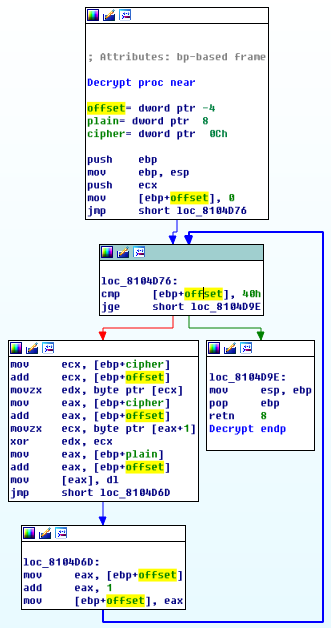 There exists another version of DecryptC2Cfg as that found in sample md5=474429d9da170e733213940acc9a2b1c. The difference is that the addresses of cipher text and flag are hardcoded.

*Figure 5, Another version of DecryptC2Cfg() function *

As for the Decrypt function, the same control flow graph was seen shared among all found samples.

When analyzing the new version of samples we found that the decryption functions, aka DecrytpC2Cfg and Decrypt, are usually not inside any valid sections. The following is the code snippet found in the sample with MD5 of 474429d9da170e733213940acc9a2b1c. The code is responsible for calling the called DecryptC2Cfg with address of 0x8130800.

Figure 6, The DecryptC2Cfg() function not inside valid sections

It’s easy to observe the sample sections with Linux utility readelf. The following is the output of “readelf –S” for sample md5=474429d9da170e733213940acc9a2b1c. It’s obvious that the address of 0x813080 is not inside any valid sections, which provides another evidence that the decryption code is inserted by some 3rd builder. 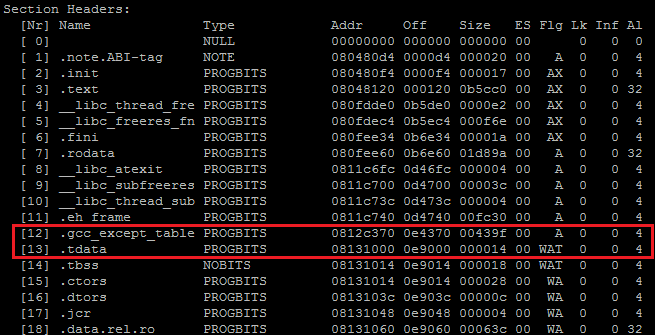 Figure 7, the address of DecryptC2Cfg outside of valid sections

We have written a YARA rule according to the 2 cases of DecryptC2Cfg functions as follows.

After mining the sample database, we found that the first sample of this variant had appeared as early as April 2015. Currently there are about 750 of such samples were collected, with nearly 700 unique C2 servers extracted. We will keep on watching the growth of this notorious DDoS family in the future.