"Who is Stealing My Power" is a series of articles on the topic of web mining that we observed from our DNSMon system.

As we mentioned in this series of one, two, and three , the players in the market can be mainly divided into mining sites and content/traffic sites. The former provides mining capabilities and the latter provides traffic.

For the mining sites, the coinhive family is currently the largest, accounts for roughly 58% of the market share.

A lot of interesting things can be observed by tracking DNS traffic for the coinhive family domain name through DNSMon. For example, the following figure shows the volume distribution of domain name requests that are closely related to coinhive.com. (Time: 2018-01-31 to 2018-02-15) 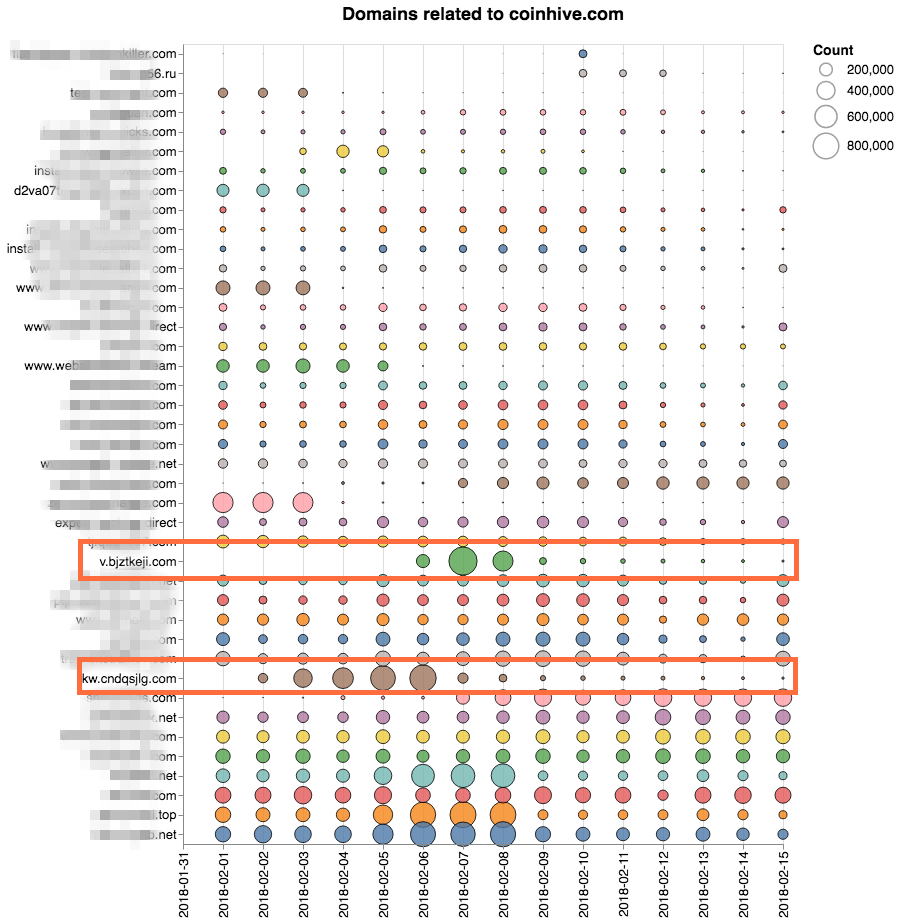 The domain names in the figure all have close relationship with coinhive.com , and you can see their dns request volumes vary. Now let’s take a close look at two of them kw.cndqsjlg.com and v.bjztkeji.com. From February 3 to February 8. The volume rapidly increased but quickly disappeared after February 9. Unlike other stable domain names, the appearance of these two domain names is very abrupt.

The request volumes of these two domain names shoot up at the beginning and then quickly disappeared. This abnormal behavior caught our attention. So here is our analysis.

The Fluctuations of Coinhive.com Request Traffic

As seen in the above chart, the dns traffic of coinhive.com has some major fluctuations between Feb 1st and 10th. It can be broken into four sections:

Now let’s exam the causes of these anomalies.

The First Spike of Coinhive Traffic

You can easily spot the big spike of coinhive dns traffic in stage 1, what caused this?

During the period stage 2, from Feb 6 to Feb 7, you can see coinhive traffic had a significant dip, the reason?

After the 7th, the domain name was no longer active.

The Second Spike of Coinhive Traffic

Now let’s take a look at stage 3, we can see there is another traffic spike for coinhive, the reason?

Similar to above, there is another new domain v.bjztkeji.com (blue line) started to show up:

On Feb 8, 360 security published an article disclosed this security case, pointed out the company behind was a domestic adnetwork and blocked the above behavior in our browser products. Correspondingly:

Ad network involved cryptojacking is something really worth noting. In our previous article, we published a similar case regarding to an US company, we will not be surprised there are other players in the market that are doing similar thing.

We will continue to monitor the web mining market. If readers have new discoveries, feel free to contact us on twitter.

360 Netlab Blog - Network Security Research Lab at 360
—
A Case Study: How One Big Player Could Impact the Cohive Business in China
Share this