The security community was moving very fast to take actions and sinkhole the Satori botnet C2 after our December 5 blog. The spread of this new botnet has been temporarily halted, but the threat still remains.

What really stands out is something we had never seen before, this new variant actually hacks into various mining hosts on the internet (mostly windows devices) via their management port 3333 that runs Claymore Miner software, and replaces the wallet address on the hosts with its own wallet address.

Also worth mentioning is that the author of Satori.Coin.Robber claims his current code is not malicious and leaves an email address(see the section below for more details):

A Series of Security Issues on Claymore Miner Remote Management

Claymore Miner is a popular coin-mining software used by quite a lot of mining devices these days.

According to its document, the Claymore Miner Windows version provides a remote monitoring and/or management interface on port 3333 (the EthMan.exe file in the “remote management” directory). And by default earlier versions allow not only remote reading for mining status, but also operations like restart, upload files and some other control operations.

Apparently, the above feature is a security issue. As a fix, after version 8.1, the Claymore Miner will not use port 3333 but -3333 (a negative one) as the startup parameter by default, which means read-only monitoring actions are supported, but other controlling actions are all denied.

But this is not the end. In November 2017, CVE-2017-16929 went public, which allows remote read and/or write to arbitrary files for Claymore Miner. The corresponding exploit code has also been disclosed.

The scanning payload (the exploit code) we are going to discuss here is different from all above though. It works primarily on the Claymore Mining equipment that allows management actions on 3333 ports with no password authentication enabled (which is the default config). In order to prevent potential abuse, we will not discuss too much details in this article.

Satori.Coin.Robber Variant is Exploiting above Issue to Robber ETH Coins

These samples are subsequent variants of Satori, which scan not only the previous 37215 and 52869 ports, but also the 3333 ports. The payload on on three ports are:

The scanning payload on port 3333 is shown in the above image. Satori.Coin.Robber issues three packets respectively:

During this process, the mining pool and the wallet will be replaced:

Similarities and Differences between Satori.Coin.Robber and the Original Satori

Comparison between Satori.Coin.Robber and Satori:

Below are some detailed screenshots: 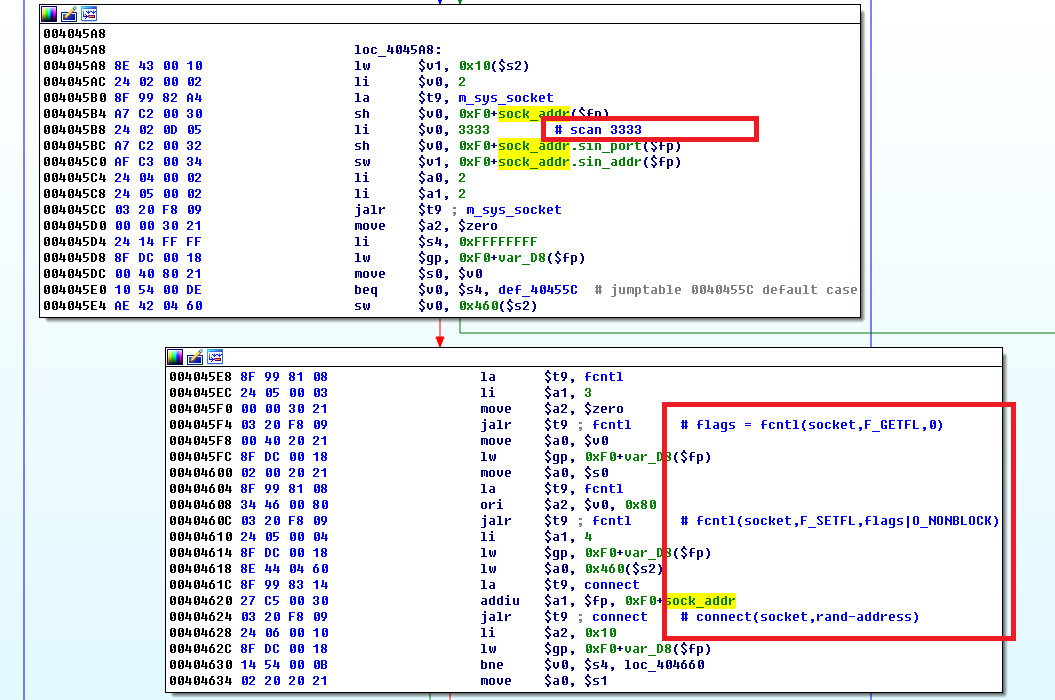 All C2 protocol lists as follows, note the fourth one is not written anywhere in the Satori.Coin.Robber code, we just tied and found it has dns response:

The first two responses are the same mining pool and wallet addresses used by the bot after tampering with other Claymore Miner mining equipment. However, at this stage, it seems that these server returned values is yet to be used.

We evaluate Satori.Coin.Robber's infection scale and trend by comparing the scanning volumes on three ports: 37215, 52869 and 3333.

The three figures above show that the scanning volumes of these three ports all increase sharply during this period, which is consistent with the behavior of Satori.Coin.Robber samples.