360 Netlab Blog - Network Security Research Lab at 360
—
Fodcha Is Coming Back, Raising A Wave of Ransom DDoS
Share this

On April 13, 2022, 360Netlab first disclosed the Fodcha botnet. After our article was published, Fodcha suffered a crackdown from the relevant authorities, and its authors quickly responded by leaving "Netlab pls leave me alone I surrender" in an updated sample.No surprise, Fodcha's authors didn't really stop updating after the fraudulent surrender, and soon a new version was released.

In the new version, the authors of Fodcha redesigned the communication protocol and started to use xxtea and chacha20 algorithms to encrypt sensitive resources and network communications to avoid detection at the file & traffic level; at the same time, a dual-C2 scheme with OpenNIC domain as the primary C2 and ICANN domain as the backup C2 was adopted.

Relying on the strong N-day vulnerability integration capabilities, the comeback of Focha is just as strong as the previous ones. In our data view, in terms of scale, Fodcha has once again developed into a massive botnet with more than 60K daily active bots and 40+ C2 IPs, we also observed it can easily launch more than 1Tbps DDos traffic; in terms of attacks, Fodcha has an average of 100+ daily attack targets and more than 20,000 cumulative attacks, on October 11, Fodcha hit its record and attacked 1,396 unique targets in that single day.

While Fodcha was busy attacking various targets, it has not forgot to mess with us, we saw it using N3t1@bG@Y in one of it scan payload.

Backed by our BotMon systems, we have kept good track of Fodcha's sample evolution and DDoS attack instructions, and below are the sample evolution and some important DDoS attack events we have seen. (Note: The Fodcha sample itself does not have a specific flag to indicate its version, this is the version number we use internally for tracking purposes)

In April, we confirmed that the number of Fodcha's global daily live bots was about 60,000 (refer to our other article). We don’t have accurate number of the current size, but suspect that the number of current active bots has not dropped, maybe more than 60,000 now.

There is a positive relationship between the size of a botnet and the number of C2 IPs, and the most parsimonious view is that "the larger the botnet, the more C2 infrastructure it requires. In April, there were 10 c2s to control the 60,000 bots; After that, we observed that the IPs corresponding to its C2 domains continued to increase. Using a simple dig command to query the latest C2 domain name yellowchinks.dyn, we can see it resolves to 44 IPs. 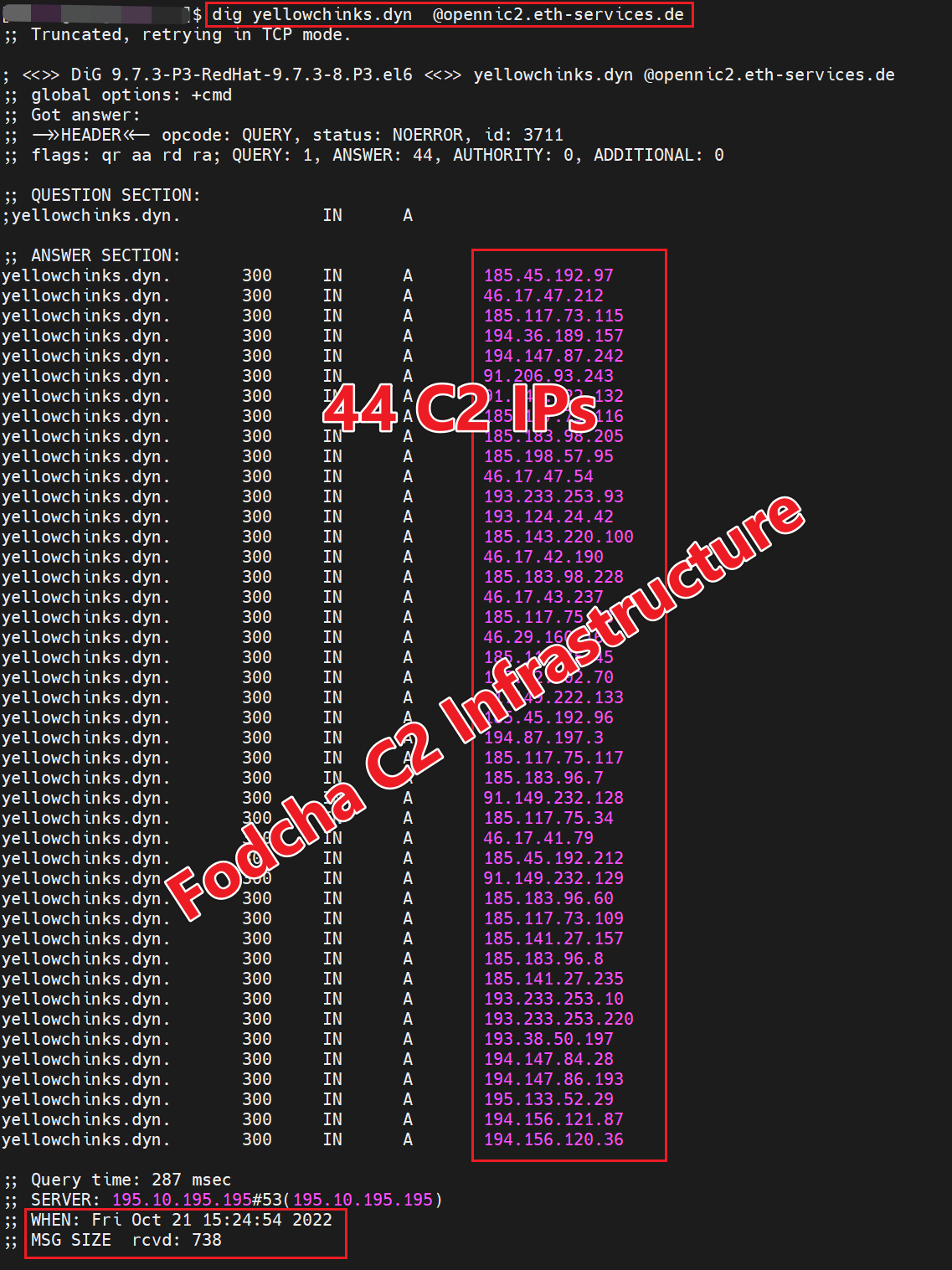 One likely reason for this is that their botnet is so large that they need to invest more IP resources in order to have a reasonable ratio between Bots and C2s to achieve load balancing.

More C2 IPs cost more money, and it seems that the business is good as it has been very active launching ddos attacks.We have excerpted the data from June 29, 2022 to the present, and the attack trends and target area distribution are as follows. 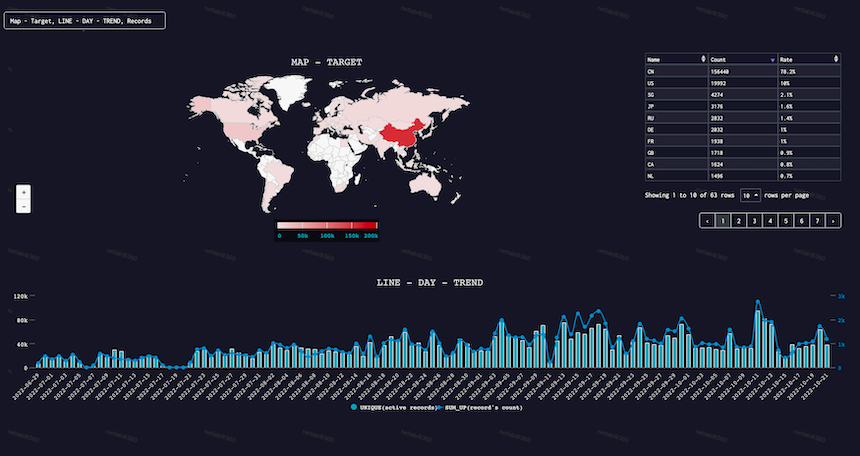 We can see that the ddos attacks has been non-stop, and China and US have the most targets.

The time distribution of the attack instructions within 7 days is shown below, which shows that Fodcha launched DDoS attacks throughout 7 * 24 hours, without any obvious working time zone. 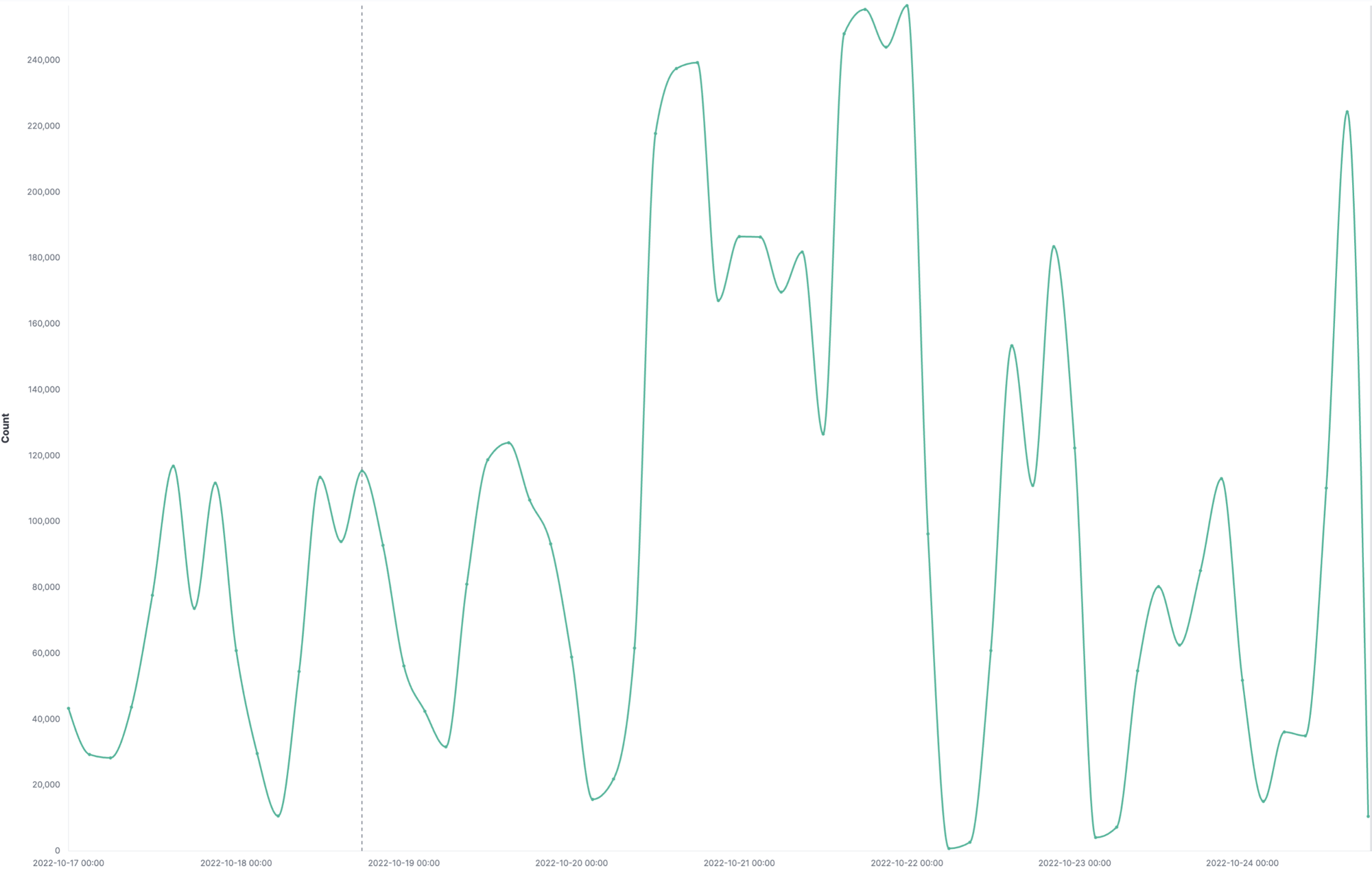 We have divided the captured samples into four major versions, of which V1and V2 have been analyzed in the previous blog, here we select the latest V4 series samples as the main object of analysis, their basic information is shown below.

When Fodcha's Bot executes, it will first check the operating parameters, network connectivity, whether the "LD_PRELOAD" environment variable is set, and whether it is debugged. These checks can be seen as a simple countermeasure to the typical emulator & sandbox.

When the requirements are met, it first decrypts the configuration information and print “snow slide” on the Console, then there are some common host behaviors, such as single instance, process name masquerading, manipulating watchdog, terminating specific port processes, reporting specific process information, etc. The following will focus on the decryption of configuration information, network communication, DDoS attacks and other aspects of Fodcha.

Although the organization of Config is different, their encryption methods are the same. As we can see by the constants referenced in the code snippet below, they use the xxtea algorithm with the key PJbiNbbeasddDfsc.

After inversion, we wrote the following IDAPYTHON script to decrypt the configuration information.

The decrypted Config information is shown in the following table. You can see that index 11 still retains the aforementioned "surrender" egg, index 12 is worth mentioning, as it is the reporter server address to which Fodcha reports some process-specific information.

Fodcha's network communication has a very fixed feature at the code level: a perpetual While loop, with switch-case processing at each stage, so that the CFG graphs generated by each version of Fodcha's network protocol processing functions are highly similar in IDA. 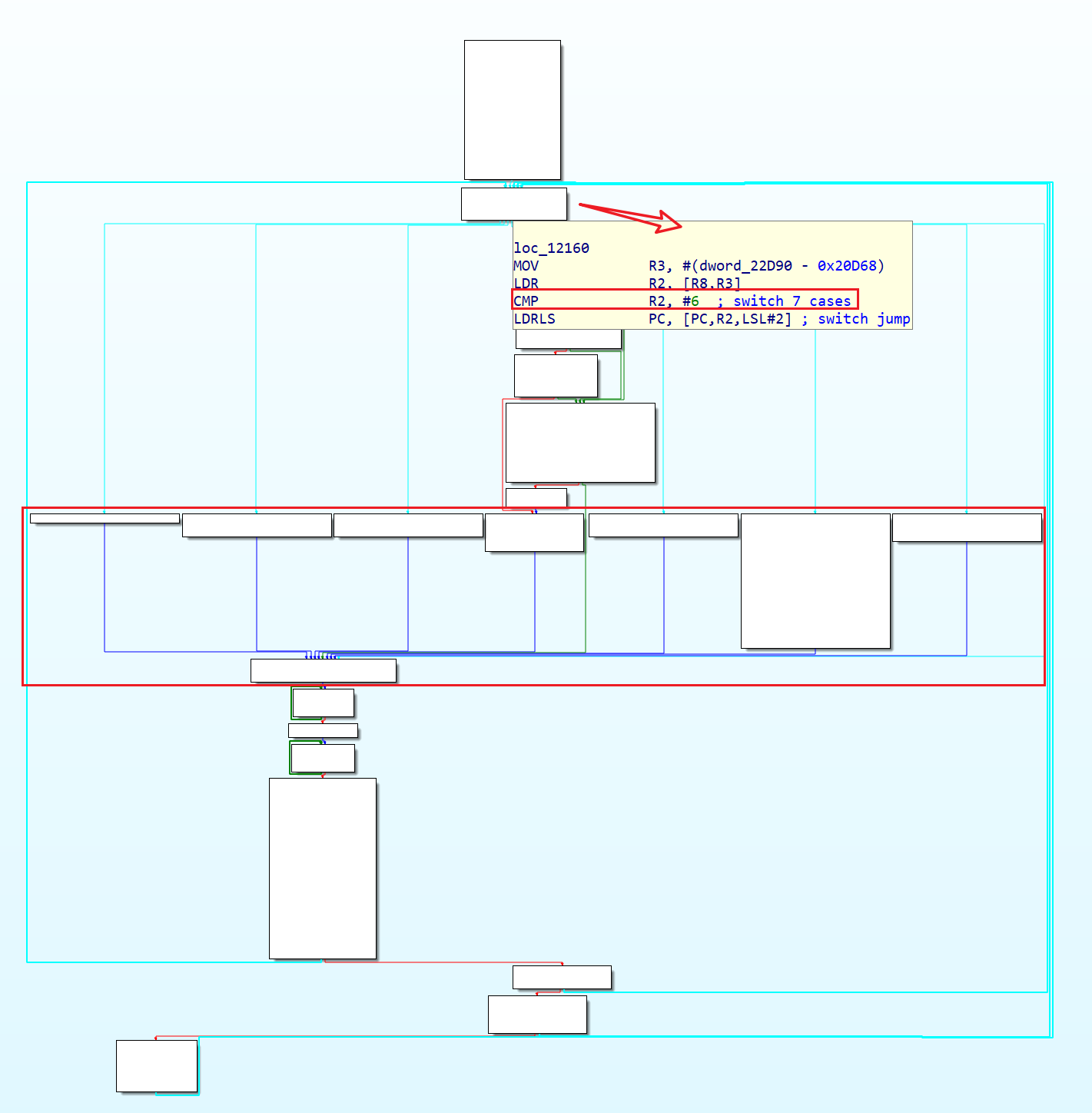 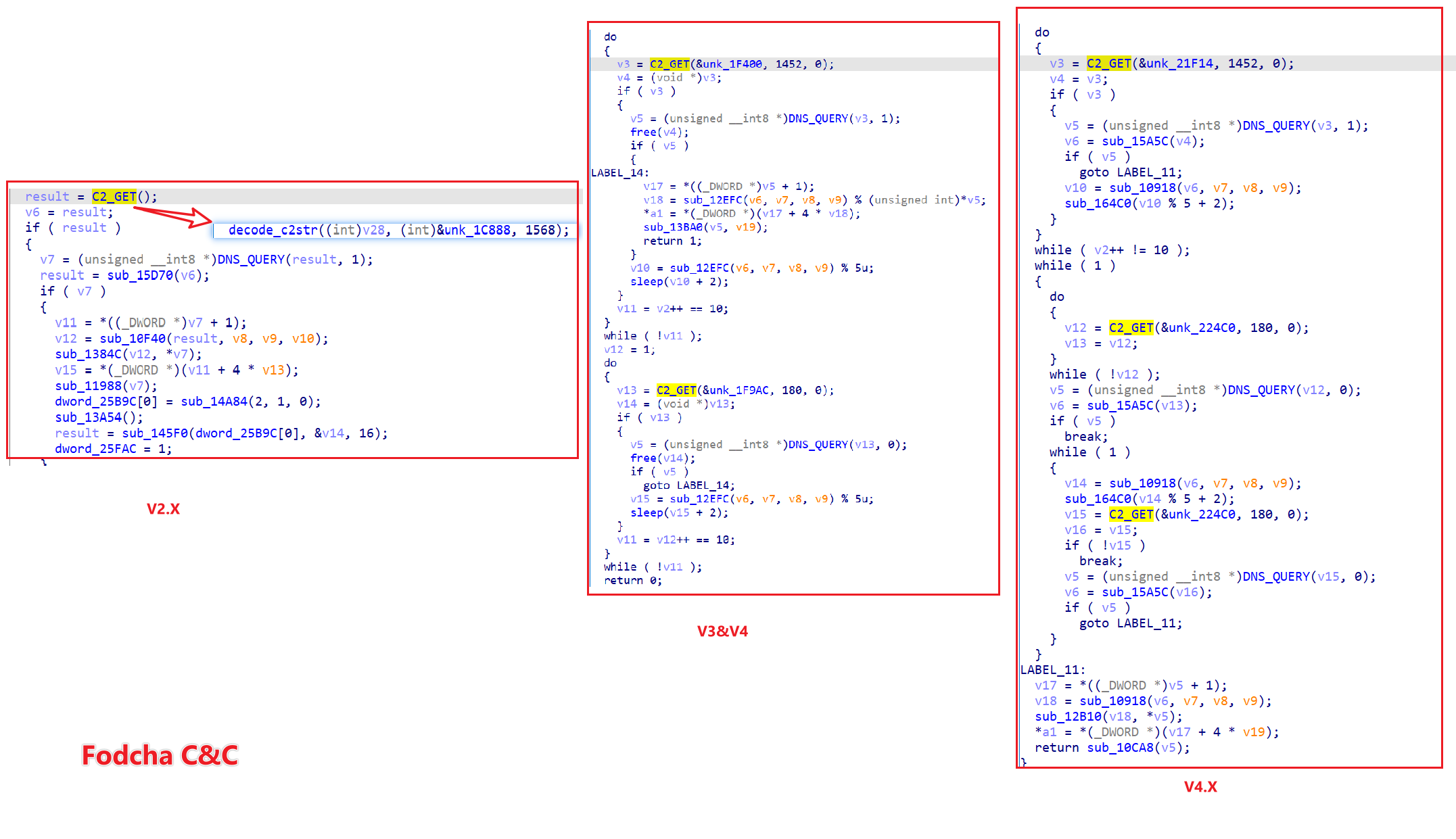 Although the types & numbers of C2 are different, their processing logic is almost the same as shown in the figure below. 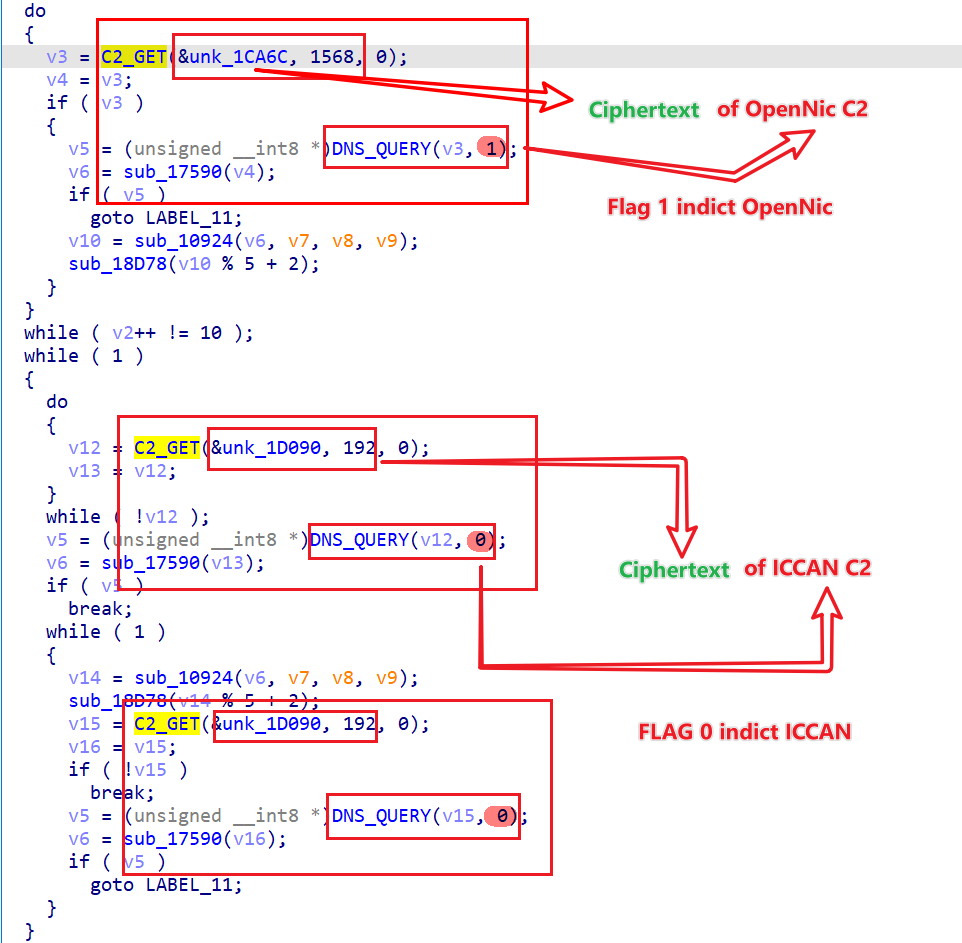 A valid C2 domain name can be obtained through C2_GET, and its internal implementation can be divided into 2 steps.

The C2 ciphertext data uses the same encryption method as the configuration information, i.e. xxtea, and the key is also

The decrypted C2 data is shown below, you can see that the C2 data consists of 2 parts, the front is the domain names, the back is the TLDs, they are separated by the "/" symbol in the red box.

Fodcha has a specific domain name construction method, and the equivalent Python implementation is shown below.

Taking the C2 data obtained above as input, the following 14 OpenNIC C2s are finally constructed.

Readers familiar with the ICANN domain name system may think at first glance that our decryption is wrong, because the ICANN domain name system does not support these TLDs, they would be "unresolvable", but in fact they are the domain names under the OpenNIC system, OpenNIC is independent of the OpenNIC, which supports the TLDs shown in the figure below. The domain names of OpenNIC cannot be resolved by common DNS (such as 8.8.8.8, 101.198.198.198) and must use the specified NameServer. Readers can check out OpenNIC’s official website for more details. 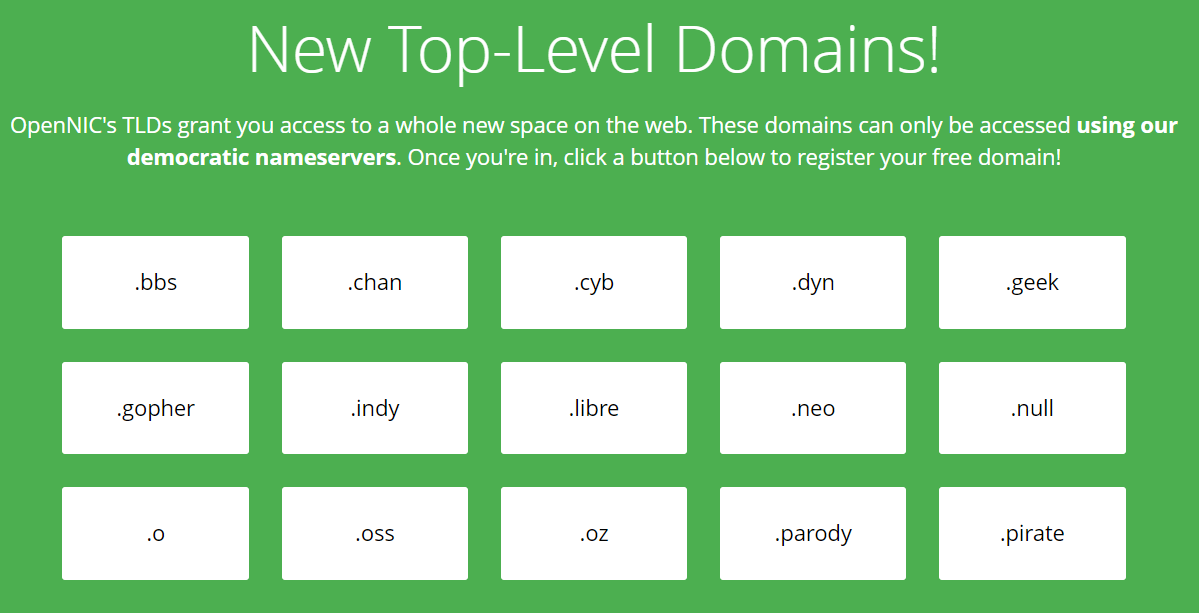 Using the same method, we can get the following 4 ICANN C2s.

When the C2 domain name is successfully obtained, Bot performs the domain name resolution through the function DNS_QUERY, its 2nd parameter is a FLAG, which implies the different processing of OpenNIC/ICANN C2, and the corresponding code snippet is shown below.

It can be seen that there are 2 options for the resolution of OpenNIC C2. 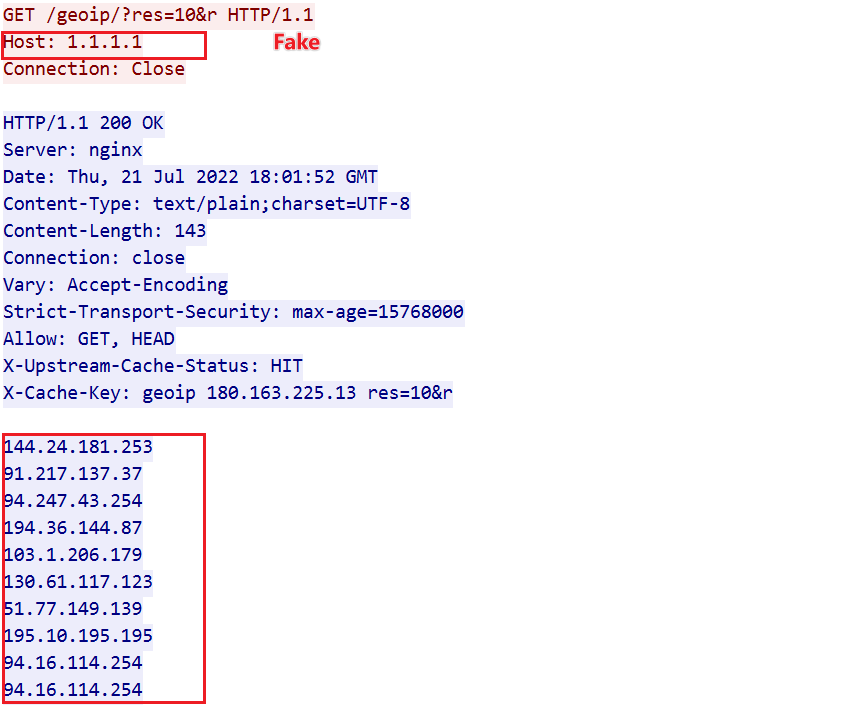 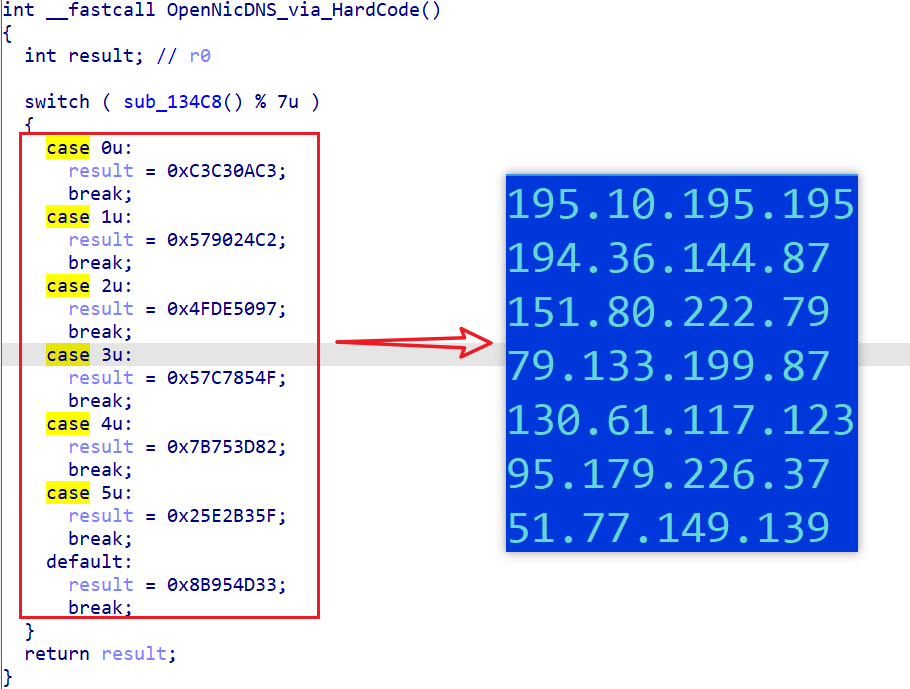 For ICANN C2, there is only one option, i.e., use the hard-coded nameserver shown in the figure below. 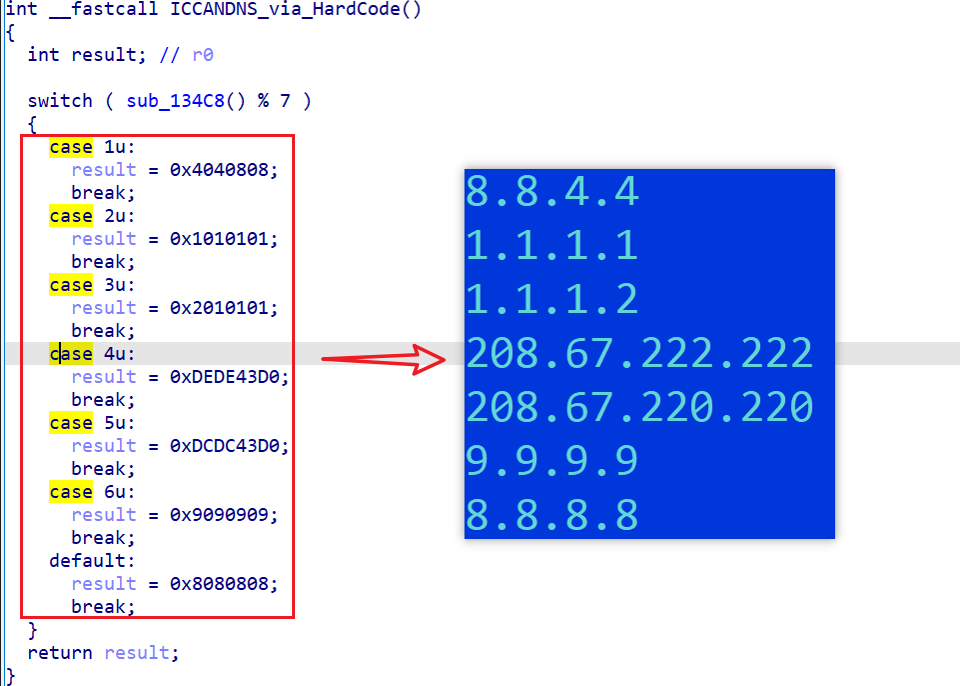 The actual resolution of C2 techsupporthelpars.oss, for example, is reflected in the network traffic as follows.

Why use OpenNIC / ICANN dual C2?

Fodcha's author has built a redundant OpenNIC / ICANN dual-C2 architecture, why did he do so?

From a C2 infrastructure perspective, after Fodcha was exposed, its C2 was added to various security lists. Quad9DNS (9.9.9.9), for example, had sent a tweet about Fodcha domain traffic spike 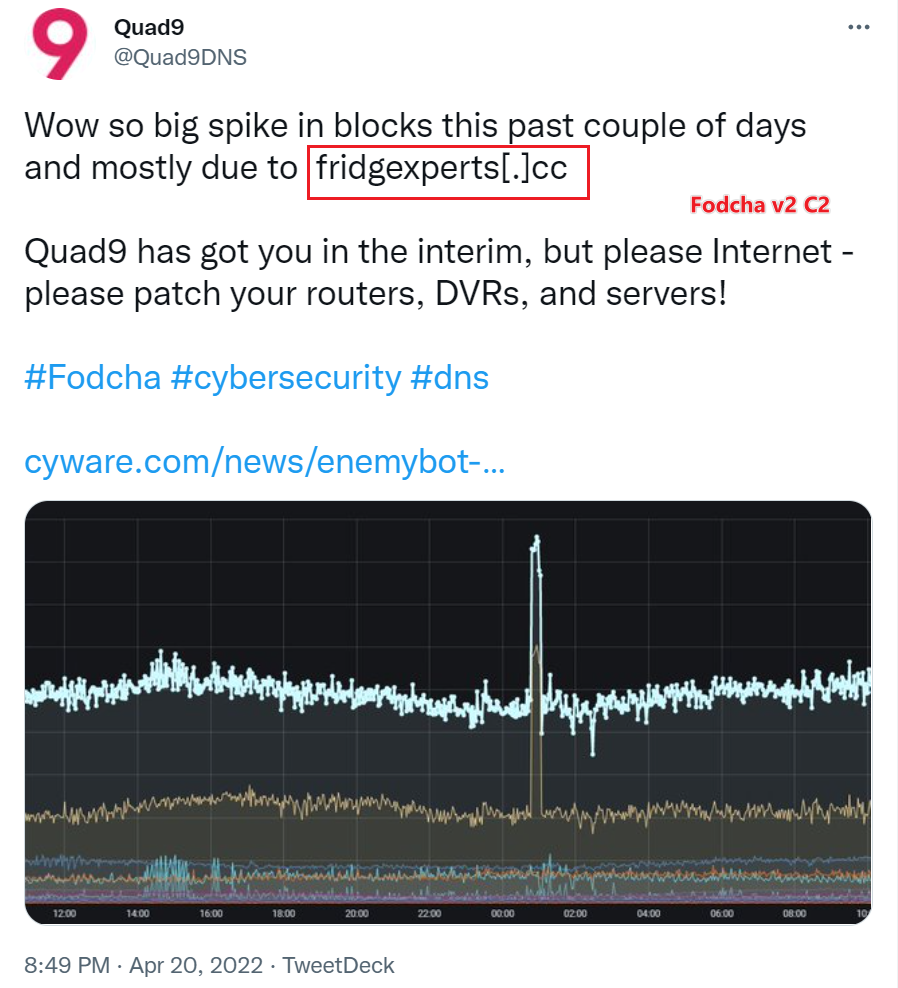 After Fodcha was cracked down, its author, when reselecting the C2 infrastructure, looked at the DNS Neutrality feature touted by OpenNIC to eliminate the possibility of C2 being regulated & taken over.

At the same time, OpenNIC based C2 has it own problems, such as the NameServer of OpenNIC may not be accessible in some regions, or there are efficiency or stability problems in domain name resolution. For the sake of robustness, Fodcha authors re-added ICANN C2 as the backup C2 after V3 to form a redundant structure with the main C2.

Fodcha Bot establishes a connection to C2 through the following code snippet, which has a total of 22 ports. 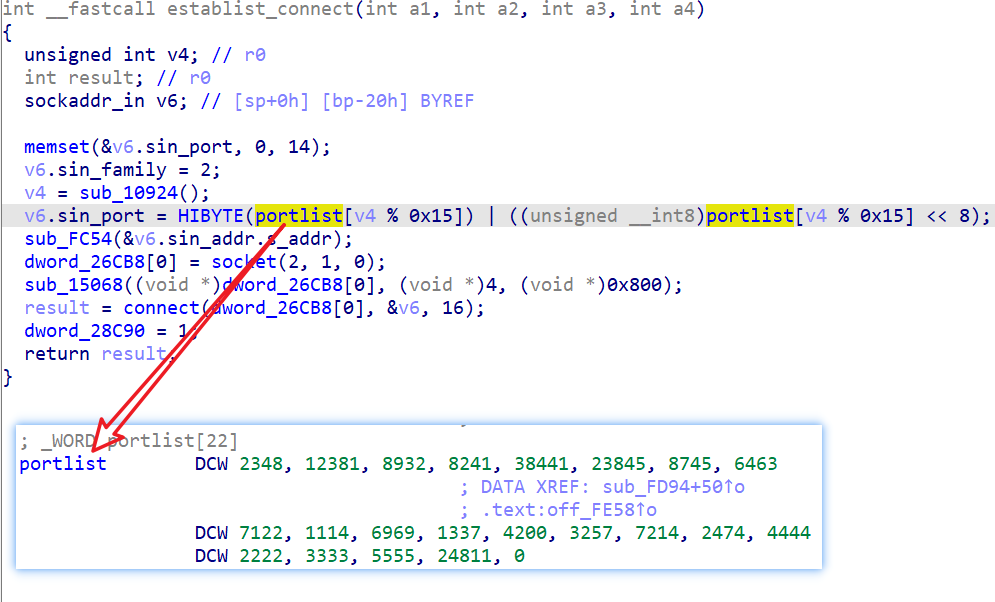 Once the connection with C2 is successfully established, the Bot and C2 must go through 3 phases of interaction before communication is actually established.

To aid in the analysis, we ran the Bot sample within a restricted environment and used fsdsaD as the packet string to generate the network traffic shown in the figure below, and the details of how this traffic was generated are described below. 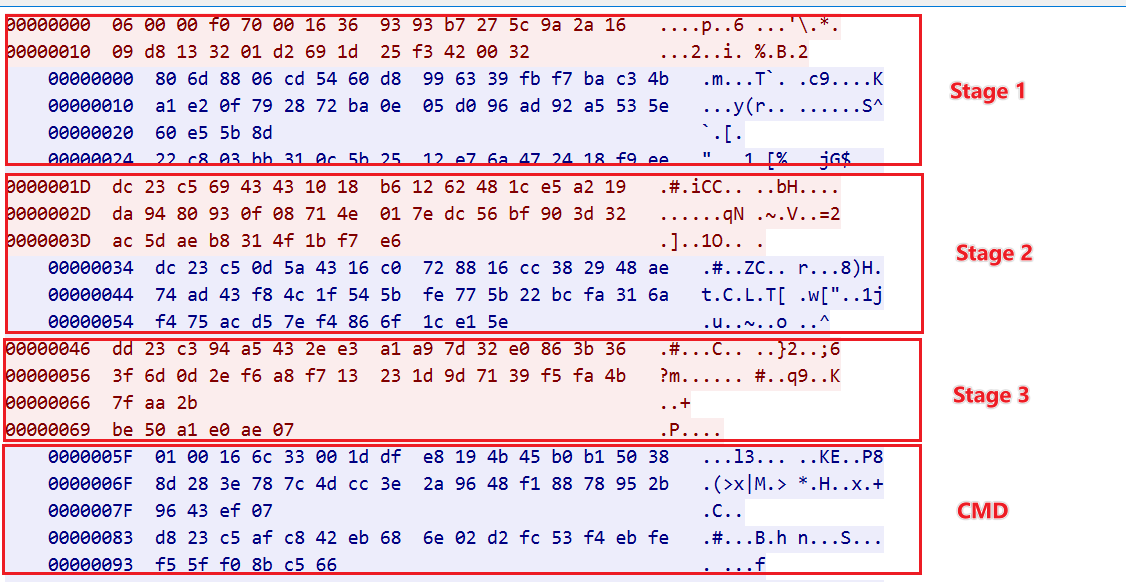 Bot actively sends an initialization message with netstage=6 to C2, this message has the format of head+body, and the meaning of each field is shown below.

The length of head is 7 bytes, and the format is shown below.

When C2 receives the message netstage=6 from Bot, it will send 2 rounds of data to BOT.

Once Bot receives the key and nonce of chacha20, it sends the message netstage=4 to C2, this time the message is encrypted using chacha20, the key&nonce is obtained from the previous stage, the number of rounds encrypted is 1.

The decrypted traffic is shown below, it still has the format of head (7 bytes) + body as described before, where the value of the netstage field of head is 04, which represents the authentication.

After receiving the authentication message from Bot, C2 also sends a message with netstage=4 to Bot's data, also using chacha20 encryption, and the key,nonce,round number is the same as that used by Bot.

Using the same code as Bot to decrypt the traffic, we can see that its format is also head+body, and the value of netstage is also 04.

After Bot and C2 send each other the message netstage=4, the chacha20 key&nonce representing stage 1 is recognized by both parties, and the authentication of each other is completed, and Bot enters the next stage to prepare to go online.

Bot sends netstage=5 message to C2 to indicate that it is ready to go online, and then reports its own grouping information to C2, these 2 rounds of messages also use chacha20 encryption.

After the above two rounds of data decryption, we can see that the content of the group is exactly the preset fsdsaD, which means our analysis is correct, so the Bot is successfully online and starts to wait for the execution of the command sent by C2.

Bot successfully online, support the netstage number, as shown in the figure below, the most important is the netstage = 1 on behalf of the DDoS task, Fodcha reuse a large number of Mirai attack code, a total of 17 kinds of attack methods are supported.

The format and parsing of the above attack instructions are shown in the following table.

When Bot receives the above instruction, it will use the tcp message with a payload of 1 byte to conduct a DDoS attack on the target xx.20.147.1:443, which corresponds to the actual packet capture traffic. 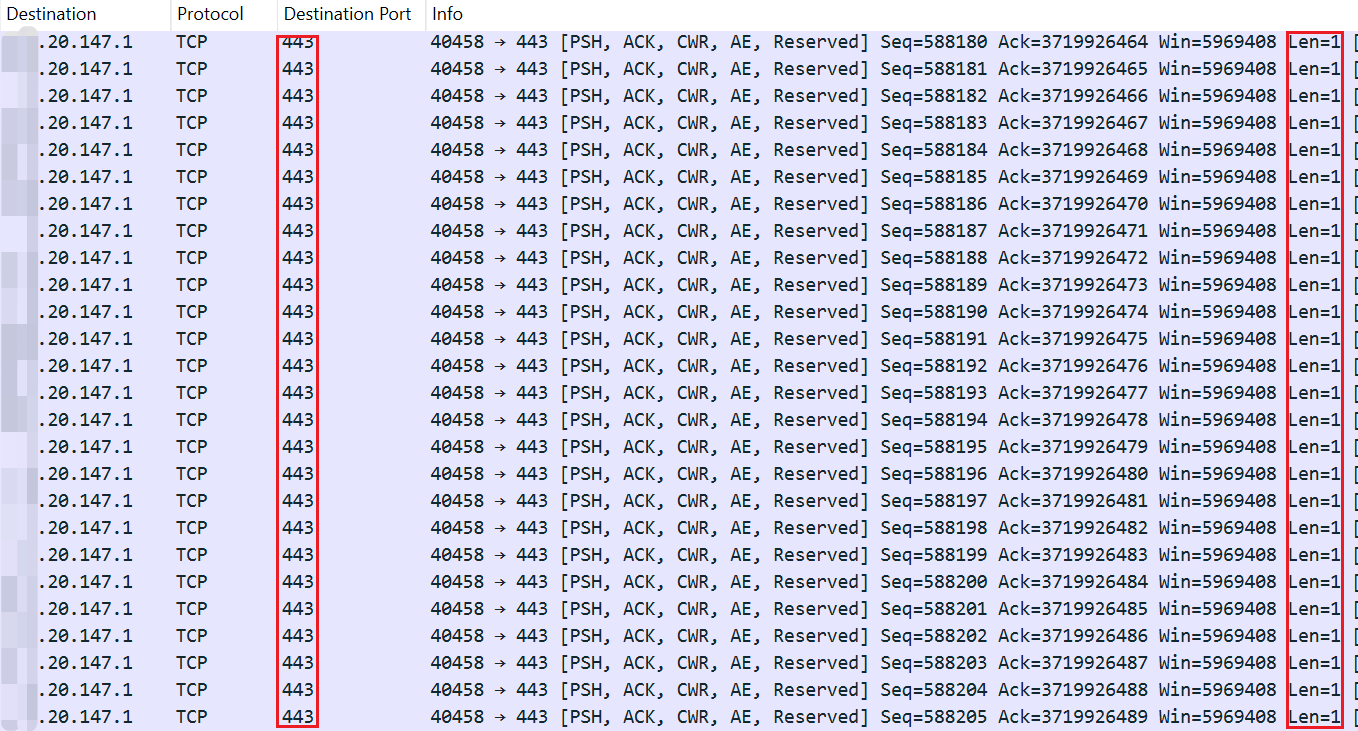 From some of the OpenNIC C2 constructs, it seems that the author of Fodcha is more hostile to people from some regions.

Fodcha had the following string attached to the UDP attack command it issued.

The corresponding attack traffic is shown below, the wallet address appears to be illegal, perhaps the operators behind Fodcha are experimenting with the attack-as-ransom business model, we will see how it evolve.

Readers are always welcomed to reach us on twitter or email us to netlab[at]360.cn.