This infrastructure owns a complicated structure, lasted a few years, supporting tens of thousands of underground sites as their customer. All together, this is a mature underground ecosystem.

The domain names we detected are listed as follows.

At the first glance of these domain names, they look like a CDN sponsored by top sites. But deeper analysis shows that the actual service on these domain names focus on gambling, pornography, server emulator and other underground business. 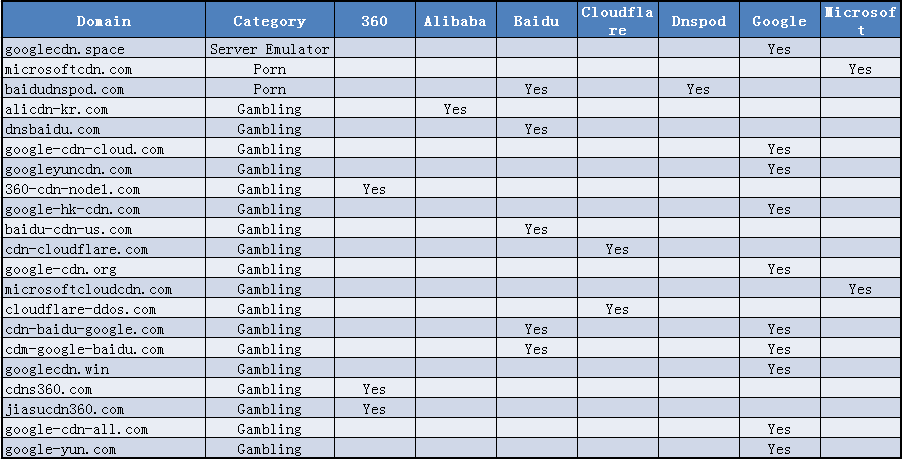 The Infrastructure Based on These Domains

Through analysis on these sites' DNS resolution records, we can see these domain names are used not only for direct content delivery, but also backbone by and for other nodes. Together with these new found nodes, we constitute a complicated infrastructure.

This network has its underground customers, in quite a large volume. Some nodes operated for quite a long time, and the business borders are clear. All together we saw a mature infrastructure dedicating on underground market.

The infrastructure network is a maze:

An Evaluation for the Complicated Infrastructure and Its Customers 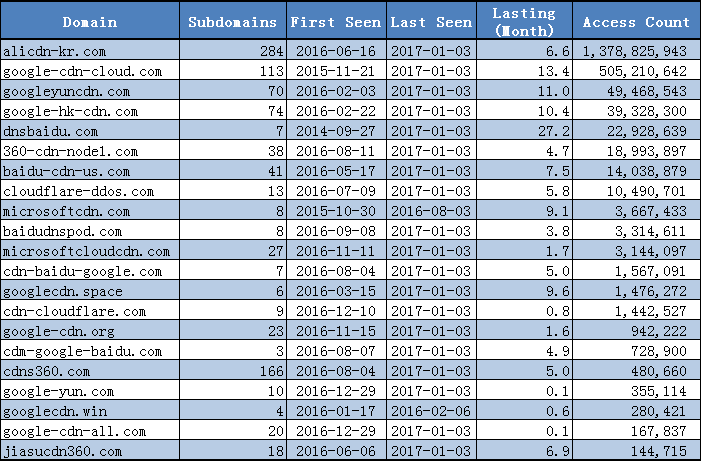 As mentioned earlier, the main user of this infrastructure is gambling, pornography, and server emulator underground site. The total user base is very large, some figures:

The IP inside China main land concentrated in data centers, and often these data centers claim a so-called GaoFang service (a high volume anti ddos service). Based on these GaoFang datacenter, this infrastructure is guaranteed somehow anti-DDoS capability.

The Autonomous System distribution of these IP is much more discrete than the geographical distribution, listed as below:

It is noteworthy that in the top-ranked AS8075 Microsoft Corporation belongs to Microsoft, and the AS45090 Shenzhen Tencent Computer Systems Company Limited belongs to Tencent.

Googleyuncdn.com and microsoftcloudcdn.com are responsible for the utility of above these two AS. They also used AS58593 Microsoft (China) Co., Ltd, AS15169 Google Inc and AS45102 Alibaba (China) Technology Co., Ltd, and other big names' AS, during different time in history.

If not carefully analyzed, people may think microsoftcloudcdn.com backboned by a Microsoft's AS looks very harmonious. However, their business are totally different, interesting.

From the domains' registration information, we can tell these domains are divided into several gangs.

In this figure, the same shading cells indicate the same group of people. Those domain name cannot attributed are not colored. Given the the infrastructure's complexity mentioned earlier, perhaps some smaller groups in the table can be attributed to a larger group in real world.

The earliest registered microsoftcdn.com is registered on May 4, 2015; the latest google-cdn-all.com is registered in December 29, 2016. Most of the domain name is paid for one year, but cdn-cloudflare.com and jiasucdn360.com are paid for 5 and 7 years. It looks like these people are ready to do this work in a long term.

Five out of 21 domains’ registrations are privacy protected. With the help of 360netlab's whoisdb database, we trace back the registrants not privacy protected to eliminate potential abuse from "corn farmers"(those who massive register domains and wait for a higher sales price like a farmer).

After the filtering, we found that different registrants often focus on their own business areas:

Besides the string fraudulent top site, we also found other analogous words indicating a strong anti-ddos capability to attract potential customers in the domain names. 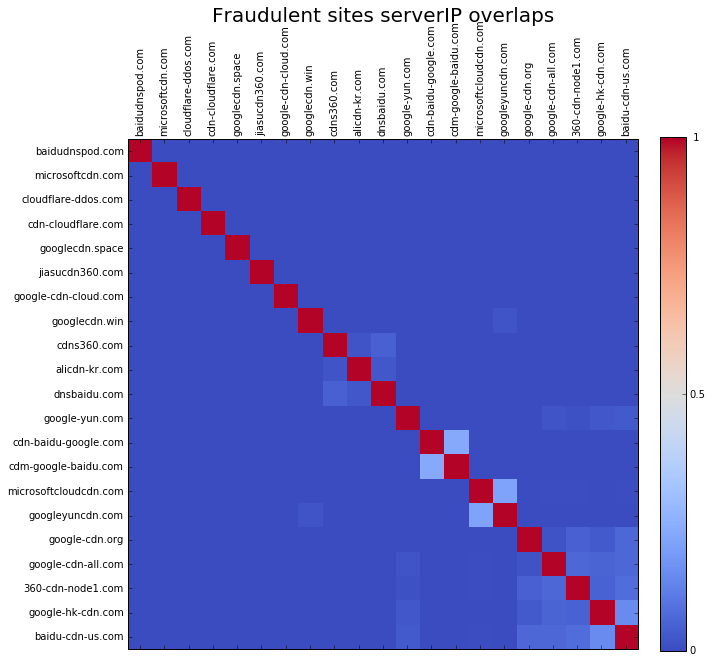 In China, gambling and pornography are illegal, so it is not surprising these business are adopting an underground dedicated infrastructure. However, the use of top site string in the domain name is still interesting.

In this article, we analyze the fraudulent top site domain names from different perspectives like whois, PassiveDNS, and IP distribution. We can draw a few conclusions here:

We hope we have presented a new perspective of the underground business infrastructure in this article. We will keep track on these fraudulent ‘top site’ domain names and the infrastructure networks to observe their follow-up developments.