Memcache UDP Reflection Amplification DDoS (hereinafter referred as Memcache DRDoS) has attracted quite some attentions from security community this week. We are not going to repeat the public known facts, and this blog will only touch base with some more details,

Memcache DRDoS, was first disclosed around 2017-06, by 0kee team from our company. Here is the detailed document first published in November 2017, at PoC 2017 conference

In this document, we point out:

Since the disclosure, we have been using DDosMon to monitor memcache DRDoS on the backbone level. In the past few months, this kind of attack is not very popular, but things have greatly changed since February 24th, 2018.

Just in a few days, Memcache DRDoS rise up from less than 50 events per day, up to 300~400 per day. And today's number has already reached 1484, with an hour to go. These numbers are shown in the following figure:

It should be noted that current Memcache DrDoS is still not the mainstream of DDoS.
It accounts for less than 1% in all DRDoS, ranks after DNS, CLDAP, NTP, SSDP, CharGen, L2TP, BitTorrent, Portmap and SNMP. 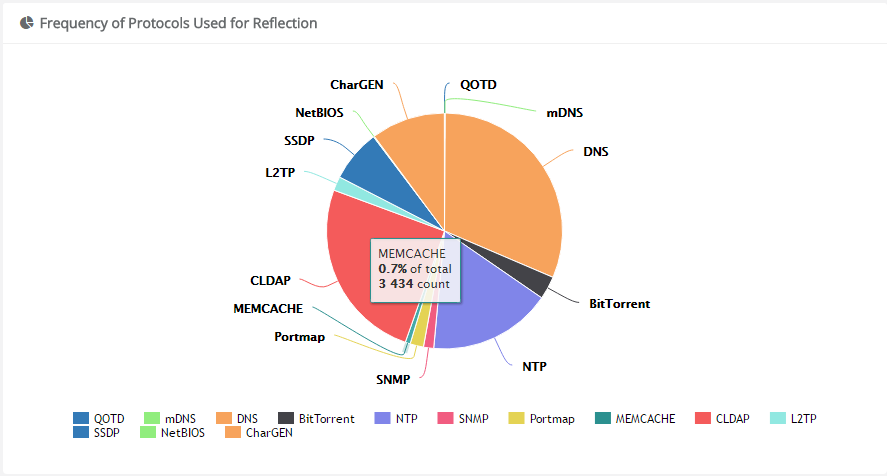 The Real Amplification Factors We Tests on Real Network

So how big the amp factor we should be expecting in real attacks? We performed some tests, as well as analyzed some real attack payloads we captured, and the following are some numbers:

Akamai has just reported a DDoS attack case, with the peak attack traffic at 1.3Tbps, a new Akamai record after 2016 Mirai DDoS attack against KrebsonSecuritycom.

On February 27, Qrator Labs reported a DDoS attack case on medium.com. According to the article, this attack is on UDP 11211 port, and convinced Memcache DRDoS, with the peak attack traffic as high as 480Gbps.

Beside these reported cases, we believe other big attacks have actually occurred but not publicly reported.

Currently, a number of related security notices have already released, part of which:

At this point, we probably will start to see more bigger attacks, "G era" to "T era of DDoS" might have started.

When event like this happens, one of the security community needs is the visibility, we have temporally setup a webpage here on our DDosMon page to track in near real-time about the Memcache attacks, it displays the Memcache attack trend, victims and some statistic, feel free to take a look.