In Feb 2021, we came across an ELF sample using some CWP’s Ndays exploits, we did some analysis, but after checking with a partner who has some nice visibility in network traffic in some China areas, we discovered there is literarily 0 hit for the C2 traffic. So we moved on.

On 4/26/2021, Juniper published a blog about this sample, we noticed that some important technical details were not mentioned in that blog, so we decided to complete and publish our report.

The ELF sample file (38fb322cc6d09a6ab85784ede56bc5a7) is a Dropper, which releases a Rootkit. Juniper did not name it, so we gave it a name Facefish, as the Dropper released different rootkits at different times, and Blowfish encryption algorithm has been used.

Facefish consists of 2 parts, Dropper and Rootkit, and its main function is determined by the Rootkit module, which works at the Ring3 layer and is loaded using the LD_PRELOAD feature to steal user login credentials by hooking ssh/sshd program related functions, and it also supports some backdoor functions. Therefore, Facefish can be characterized as a backdoor for Linux platform.

The main functions of Facefish are

The basic process is shown in the following diagram.

The vulnerabilities exploited in the wild are shown below

After decoding the part related to Facefish, the following execution command sequence is obtained, which can be seen that the main function is to download the payload of the first stage of execution, and then clean up the traces.

In simple terms, Facefish's infection procedure can be divided into 3 stages

Stage 0: Preliminary stage, spread through the vulnerability and implanted Dropper on the device

Stage 2: Operational stage, Rootkit collects and transmits back sensitive information and waits for the execution of the instructions issued by C2

Dropper's base information is shown below, the main function is to detect the running environment, decrypt the Config and get C2 information, configure Rootkit, and finally release and start Rootkit.

It is worth mentioning that Dropper uses some tricks to counteract the detection of antivirus at the binary level.

As shown in the figure below, the encrypted Config data is used as overlay to fill the end of the sample after upx shelling.

The purpose of this approach is twofold:

As shown in the figure below, the section information in the sample is erased after the shell is removed 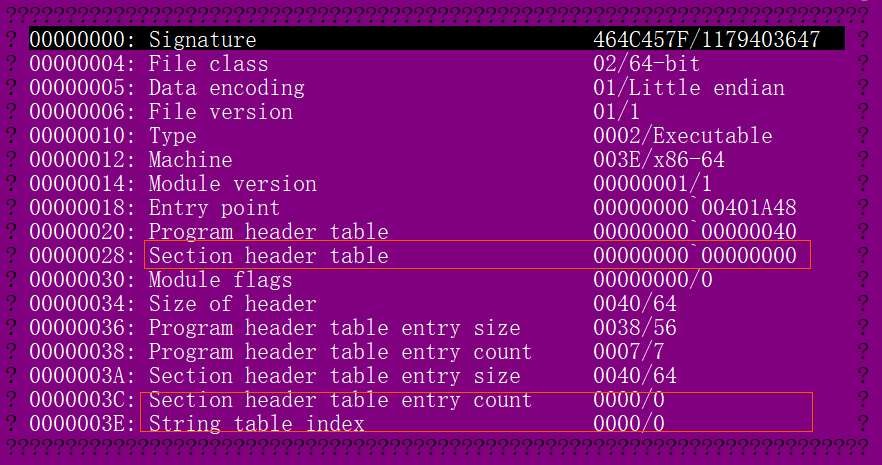 The purpose of this approach is also twofold:

Some tools that rely on section information for analysis do not work properly, and erasing sections makes analysis more difficult to a certain extent.

Dropper will output the following information when it runs

Based on this information, we can divide Dropper's functions into the following 4 stages

Read the first 16 bytes of /bin/cat, and determine the current system's bit number by checking the value of the 5th byte (EI_CLASS), currently Facefish only supports x64 system. Then it checks if it is running under root privileges and finally tries to read in the Config information from the end of its own file. If any of these steps fails, Facefish will give up the infection and exit directly. 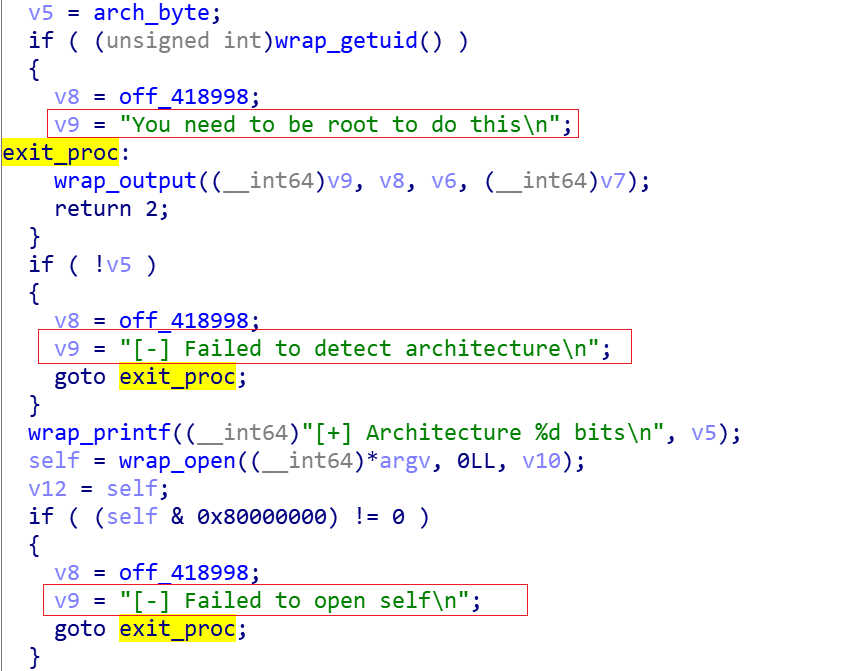 The original Config information is 128 bytes long, encrypted with Blowfish's CBC mode, and stored at the end of the file in the form of overlay. The decryption key&iv of Blowfish is as follows.

It is worth mentioning that when using Blowfish, its author played a little trick to "disgust" security researchers during the coding process, as shown in the following code snippet.

At first glance, one would think that the key for Blowfish is "build". Note that the third parameter is 4, i.e. the length of the key is 4 bytes, so the real key is "buil".

Take the original Config as an example.

The specific meaning of each field is as follows:

After the decryption is completed, the following code snippet is used to verify the Config, the verification method is relatively simple, that is, compare the magic value is not 0xCAFEBABE, when the verification passed, enter the configuration Rootkit stage.

Firstly, the current time is used as the seed to generate 16 bytes randomly as the new Blowfish encryption key, and the Config obtained from the previous stage is re-encrypted with the new key.

Then use the flag 0xCAFEBABEDEADBEEF to locate the specific location of the Rootkit in the Dropper and write the new encryption key and the re-encrypted Config information.

The changes to the file are shown below.
Before writing.

In this process because the encryption key is randomly generated, the MD5 value of the Rootkit released at different times is different, and we speculate that this design is used to counteract the black and white HASH detection of the antivirus.

It is also worth mentioning that Facefish specifically supports the FreeBSD operating system. The implementation is relatively simple, as shown below, that is, by determining whether the EI_OSABI in cat binary is equal to 9, if so, the EI_OSABI value in Rootkit is modified to 9.

Write the Rootkit configured in the previous stage to the /lib64/libs.so file, and write the following to /etc/ld.so.preload to realize the Rootkit preload.

The actual effect is shown below.

At this point Dropper's task is complete and Rootkit starts working.

Facefish's Rootkit module libs.so works at the Ring3 layer and is loaded through the LD_PRELOAD feature, its basic information is as follows.

In IDA you can see that it exports 3 functions, according to the preload mechanism, when rootkit is loaded, they will replace libc's function of the same name and implement hook.

Analysis of the .init_proc function

The .init_proc function will first decrypt Config, get C2, PORT and other related information, then determine if the process being injected is SSH/SSHD, if it is, then HOOK the related functions that handle the credentials, and finally when ssh actively connects to it, or when sshd passively receives an external connection, Facefish, with the help of Hook function steals the login credentials and sends them to C2.

If the current system is FreeBSD, the dlopen function obtains the address of the link_map structure and uses the link_map to iterate through the modules loaded by the current process to find SSH-related modules. If the current system is not FreeBSD, the address of the link_map is obtained from item 2 of the .got.plt table. 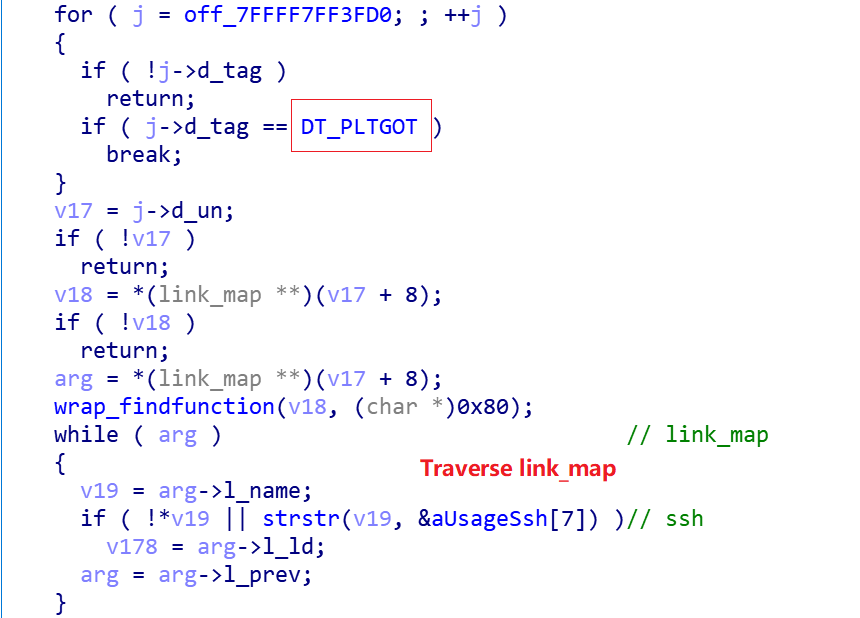 After getting the SSH related module, the next step is to determine if the module is ssh/sshd in a relatively simple way, i.e. verifying that the following string is present in the module. By this, it is known that Facefish in fact only attacks the OpenSSH implementation of client/server.

First, Facefish looks for the address of the function to be hooked

where the ssh function to be hooked is shown as follows. 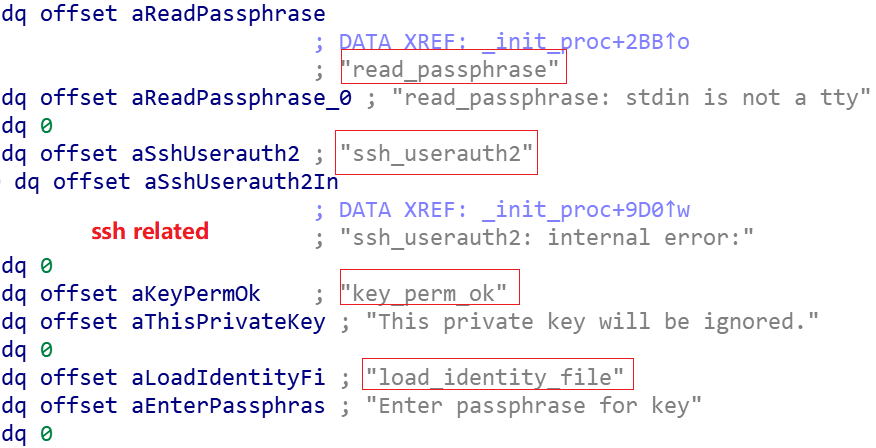 The sshd function to be hooked is shown below.

The actual comparison before and after HOOK is shown below.

Facefish steals the login credentials with the help of the function after Hook and reports it to C2.

The reported data format is %08x-%08x-%08x-%08x,%s,%s,%s,%s,%s, where the first 32 sections are the encrypted key, followed by the account number, remote host, password and other information.

The information reported in practice is shown below.

Once the user logs in through ssh, it will trigger the bind function and then execute a series of backdoor behavior, as follows.

If the backdoor is initialized normally, it will first fork the backdoor process and enter the instruction loop of C2 connection, and the parent process will call the real bind function through syscall(0x68/0x31).

Facefish uses a complex communication protocol and encryption algorithm, among which the instructions starting with 0x2XX are used to exchange public keys, which we will analyze in detail in the next subsection. Here is a brief explanation of the C2 functional instructions.

Whether to send the registration information 0x305, if not, collect the information and report it.

Send instruction 0x311 to return the result of bash execution

Rootkit's communication process uses DH (Diffie–Hellman) key exchange protocol/algorithm for key exchange, and BlowFish is used for communication data encryption, so it is impossible to decrypt the traffic data only. Each session is divided into two phases, the first phase is key negotiation, the second phase uses the negotiated key to encrypt the sent data, receives and decrypts a C2 command, and then disconnects the TCP connection. This one-at-a-time encryption communication method is difficult to detect precisely by traffic characteristics.

Generally speaking, the easiest way to communicate using the DH protocol framework is to use the OpenSSL library, and the author of Facefish has coded (or used some open source projects) the whole communication process himself, and the code size is very compact because no third-party libraries are introduced.

In essence, a simple derivation shows that A and B computes by the same formula.

Sending and receiving packets use the same data structure.

As an example, the 0x200 instruction packet can be defined as follows.

With iv and s we can encrypt and decrypt the communication data. The real communication data is encrypted using BlowFish algorithm, which is the same as the method of profile encryption mentioned before. bot sends 0x305 command to C2 with the length of 0x1b0, and the content is the registration packet data after BlowFish encryption.

The decrypted uplink packet data is as follows.

On Apr 28, we published our RotaJakiro backdoor blog, at that time, we didn’t have the answer for a very important question, what is this backdoor exactly for? We asked the community