Our honeypot system captured a new DDoS botnet sample on 2019-06-23. We named it Emptiness which comes from the running process name as well as its C2 domain. Emptiness is written by Golang and supports both Windows and Linux. Our further analysis reveal its iterative evolution: the early version Emptiness was only armed with DDoS function and was propagated through Mirai.shiina variant botnet that had been run by the same author for a long time. The latter version Emptiness was added with ssh scan to enable self-propagation. Besides, C2 communication protocols of both Emptiness and Mirai.shiina kept changing constantly, which increases the difficulty of being tracked by security researchers.

The Timeline of Emptiness

The following table summarizes the main differences between three versions of Emptiness. 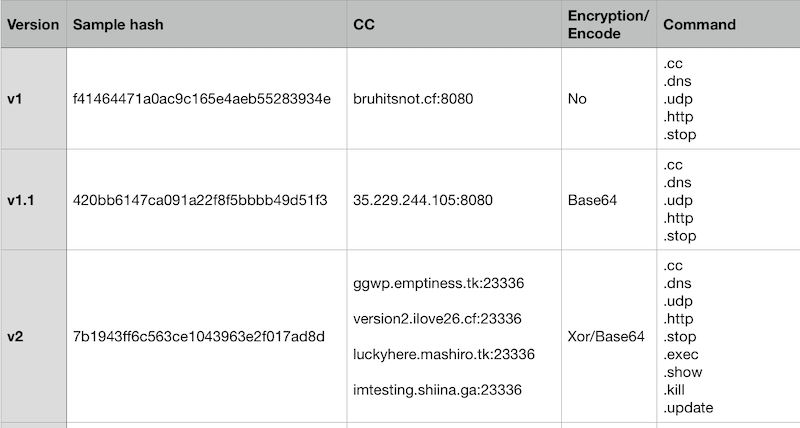 All these three versions are written by Golang and are protected by standard UPX. As shown in the following figure, their main function logics are mainly implemented in main package and can be categorized into three aspects: host behavior, data encoding/encryption and C2 protocol. Next we will introduce Emptiness from these three aspects. Most host behaviors performed by Emptiness are common operations, such as ensuring singleton, modifying process name, turn off watchdog, clear history logs, delete system command, stop system service and so on. The only thing worth to note is that Emptiness will kill process using specific ports through its main_killer_init function. In this way, it can remove bot competitors and close vulnerable ports and thus occupy victim machine exclusively. The following figures show its methods of killing process and the ports it intends to kill.

We demonstrate how Emptiness encodes or encrypts data in different versions using its register message.

The Relation between Emptiness and Mirai.shiina

Two of the four Emptiness.V2 C2 servers(luckyhere.mashiro.tk and imtesting.shiina.ga) were used by mirai variant. Mirai.shiina and the corresponding sample is f6e9f3567684a0a7402ad97209b8525b. We name it Mirai.shiina based on its infection command /bin/busybox SHIINA and its sample file name shine.{arch}. Sharing the same C2 server strongly indicates that Emptiness and Mirai.shiina belong to the same author.

Our monitor system shows that Mirai.shiina botnet was running at least from 2019-03 to 2019-07 and during this period it was very active and deliver attack command frequently. The figure below shows some example of its attack commands.

Besides, we can divide Mirai.shiina into four versions according to the difference of its C2 protocol, see the following table and we infer that the author kept modifying C2 protocol continuously to prevent from being tracked.

Question: Why the author wants to build the new Emptiness Botnet?

According to the above analysis, we know that the author of Emptiness has also run Mirai.shiina botnet for a long time, which is active to launch DDoS attacks and seems to own quite a few bots. So why the author still wants to build the new Emptiness botnet? We guess the reasons behind are: