On 2017-09-13 at 01:02:13, we caught a new malicious sample targeting IoT devices. Starting from that time, this new IoT botnet family continued to update and began to harvest vulnerable iot devices in a rapid pace.

The bot borrowed some code from the famous mirai botnet, but it does not do any password crack all. Instead, it purely focuses on exploiting IoT device vulnerabilities. So, we name it IoT_reaper.

IoT_reaper is fairly large now and is actively expanding. For example, there are multiple C2s we are tracking, the most recently data (October 19) from just one C2 shows the number of unique active bot IP address is more than 10k per day. While at the same time, there are millions of potential vulnerable device IPs being queued into the c2 system waiting to be processed by an automatic loader that injects malicious code to the devices to expand the size of the botnet.

Currently, this botnet is still in its early stages of expansion. But the author is actively modifying the code, which deserves our vigilance.

Here we are sharing some quick summary so the security community may stop its before it causes bigger damage.

From Mirai, Beyond Mirai

The botnet partially borrows some mirai source code, but is significantly different from mirai in several key behaviors, including:

Take hxxp://162.211.183.192/sa as an example, IoT_reaper's sample delivery and C2 distribution are as follows. There is a downloader, quite different from Mirai:

The following figures shows traffic pattern of the above 4 IPs：

We noticed 9 IoT vulnerability exploits have been integrated into current samples as follows: 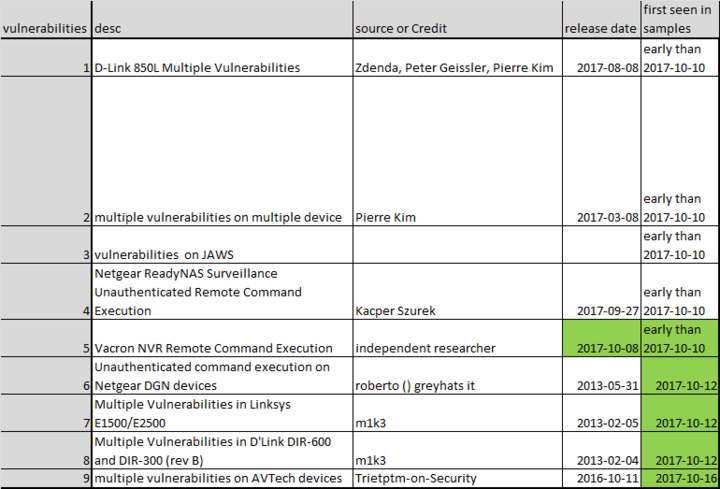 Note just in the last 10 days, the attacker has continuously added more new exploits into samples, one of which is adopted only 2 days after the disclosure of the vulnerability was made.

The LUA Execution Environment Integrated in the Malware

Md5: CA92A3B74A65CE06035FCC280740DAF6
Based on the integrated LUA execution environment, author will be able to write very complex and efficient attack scripts now

Approximately 100 DNS Open Resolvers Were Integrated in This Malware

The botnet has embedded more than 100 DNS open resolvers in its lua sample, so dns amplification attack can be easily carried out. And a cross-checking with our DRDoS data feed indicates that about one-third of these open DNS servers have been used as reflector in real dns amplification attacks. We have yet to see this type of config in any other mirai variants.

In terms of attacking command, although we saw support of DDoS attack in the source file of Lua execution environment, we have not seen actual DDoS attack so far. The only instructions we saw are to download samples. This means the attacker is still focusing on spreading the botnets.

By using some tricks, we are able to draw some fairly accurate measurement on the scale of the infection, here are a sample of the numbers.