On September 03, 2019, a suspicious file was tagged by our new threat monitoring system and a quick checking on VT shows most engines flagged it as Gafgyt. The sample does reuse part of the Gafgyt code, but it is not really Gafgyt.

The sample represents a brand new P2P botnet implemented based on the DHT protocol, the last botnet which uses DHT is the Hajime, and we call it Mozi according to the characteristics of its propagation sample file name Mozi.m,Mozi.a.

Mozi Botnet relies on the DHT protocol to build a P2P network, and uses ECDSA384 and the xor algorithm to ensure the integrity and security of its components and P2P network. The sample spreads via Telnet with weak passwords and some known exploits (see the list below). In terms of functions, the execution of the instructions of each node in the Mozi botnet is driven by a Payload called Config issued by the Botnet Master. The main instructions include:

The overall network structure is shown in the following figure:

The vulnerabilities used by Mozi Botnet are shown in the following table:

At present, we do not know the exact scale of the Botnet, we do manage to become a node to join the DHT network and are tracking some baseline numbers, we will share more details probably in another blog later on. And from other data we have collected, we can also see the number of infection has been increasing.The picture below shows the Mozi bot infection based on the log collected by our honeypot. 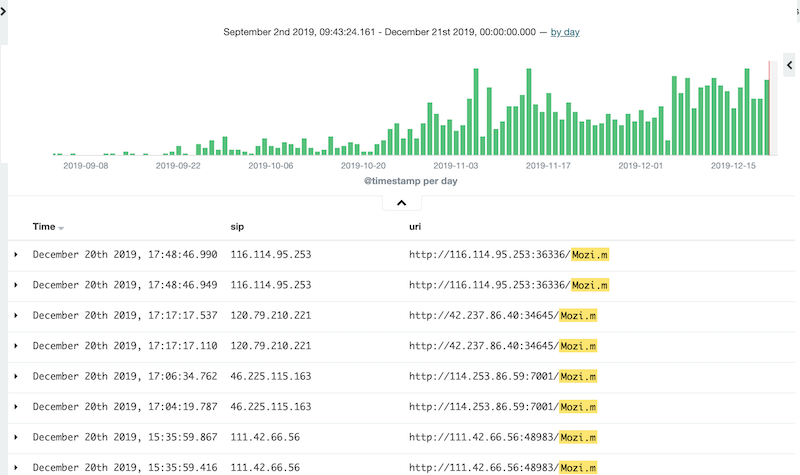 There are three versions of Mozi Botnet, which can be distinguished by their slightly different telnet propagation methods. Our analysis is mainly focus on the latest version v2, and this blog will cover the key elements such as propagation method, Config structure and its DHT network.

It is worth mentioning that in the first version Mozi(sample md5: 849b165f28ae8b1cebe0c7430f44aff3) used upx packing. But instead of using the common upx magic number to defeat unpacking, it used a novel method, to erase the value of p_filesize & p_blocksize to zero, with that change, researcher need to patch the upx source code then unpacking is possible.

Mozi doesn't have much characteristics in the host behavior level. It reuses Gafgyt's code to implements many common functions, such as single instance, process name modification, and ACL modification.

After Mozi establishes the p2p network through the DHT protocol, the config file is synchronized, and the corresponding tasks are started according to the instructions in the config file.In P2P networks, nodes are untrusted, and anyone can fake a Mozi node at a very low cost.In order to ensure that the Mozi network is completely controllable and cannot be stolen by others, Mozi needs to perform signature verification on each synchronized config, and only if it can pass the signature verification can it be accepted and executed by the Mozi node.

Mozi uses the ECDSA384 algorithm to verify the legitimacy of files and instructions. Each sample integrates two xor-encrypted public keys, which are used to sign encrypted and decrypted config files, respectively.

Each sample integrates an xor-encrypted initial config file with a length of 528 bytes. Its structure is data (428 bytes), sign (96 bytes), flag (4 bytes). The sign field is a digital signature and the flag field controls if the config file is updated or not.There are many control fields in the config file. After receiving the config, the Mozi node parses the field content and executes the corresponding subtasks.The original config file is as follows.

The decrypted config is as follows.

The supported keywords are as follows, which can be divided into three categories: declaration, control, and subtask.

Mozi Botnet uses its own extended DHT protocol to build a P2P network. There are two benefits to this. One is to use standard DHT to quickly establish a network, and the other is to use its own extension to hide the valid payload in the vast amount of normal DHT traffic so detection is impossible without proper knowledge. Mozi uses 8 sets of public nodes and the nodes specified in the [nd] field of the Config file as bootstrap nodes, toguide new nodes to join their DHT network.

The ID is 20 bytes and consists of the prefix 888888 embedded in the sample or the prefix specified by the config file [hp], plus a randomly generated string. 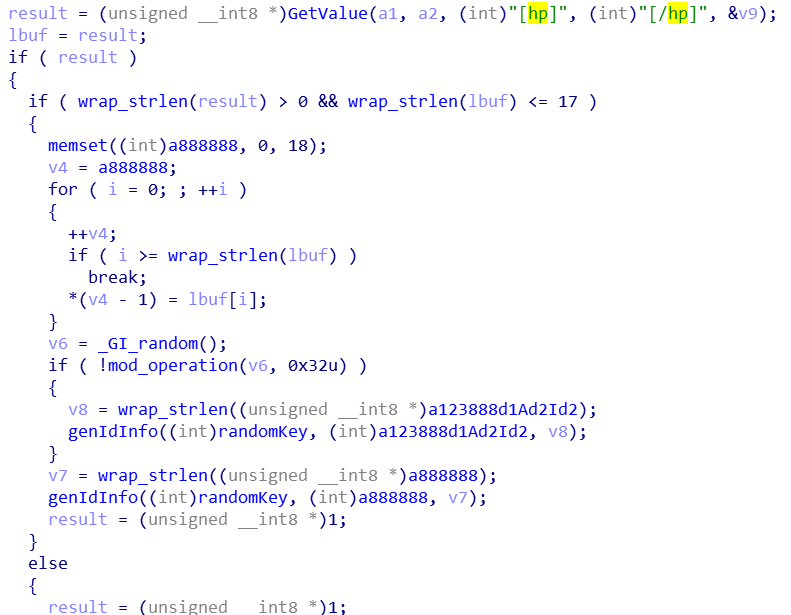 In order to distinguish regular traffic with its own traffic, Mozi uses1:v4:flag(4 bytes)such an identifier to identify whether the traffic is sent by its node. The meaning of the flag byte is as follows.

flag means is as follows

The first byte is randomly generated. The second byte is hard-coded 0x42 or specified by the [ver] field in the config file.

The 3rd and 4th bytes are obtained by the algorithm. 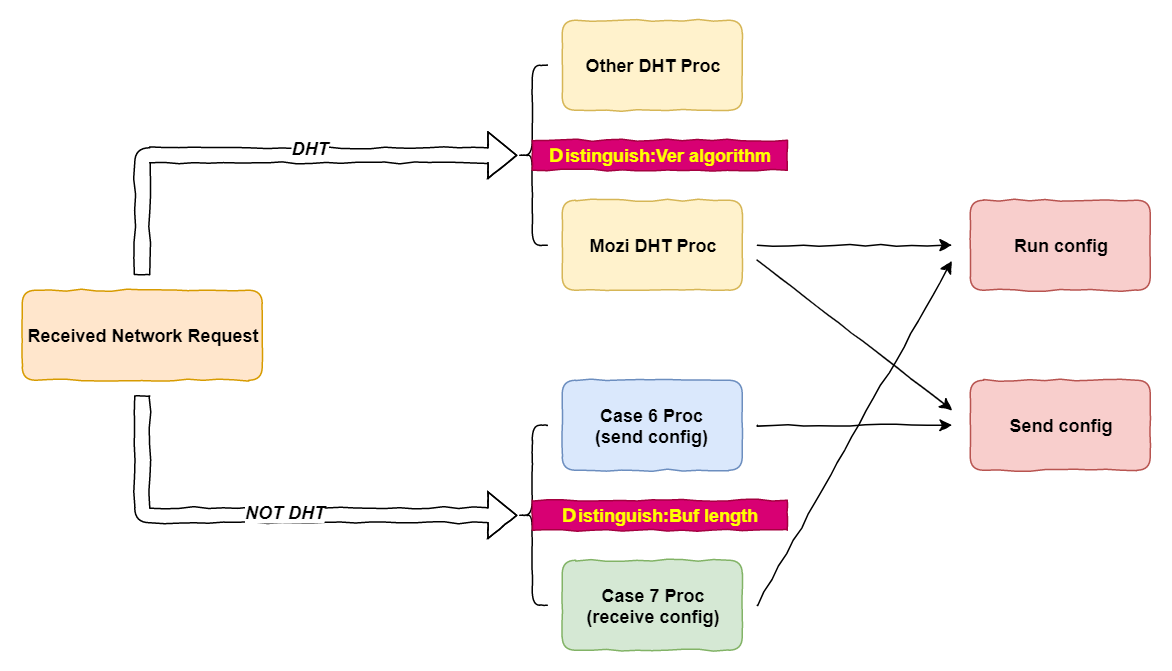 For Mozi, Different requests have different processing logic, see below 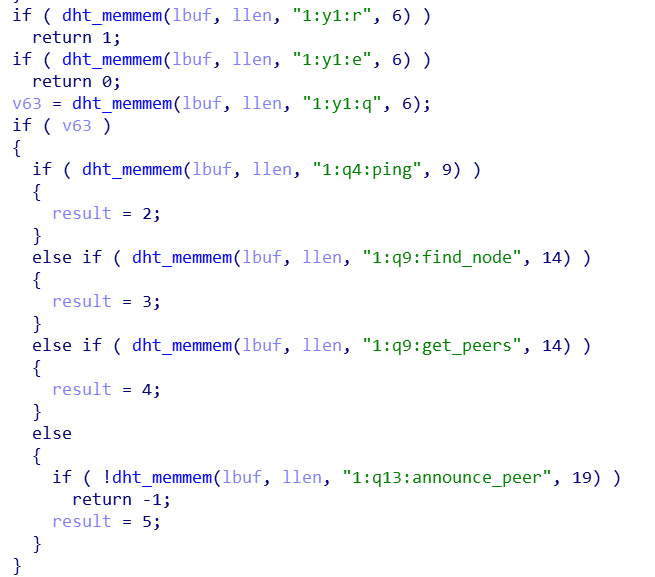 We recommend that users update the patch in a timely manner, and determine whether they are infected by looking up the process and file name, and HTTP, DHT network connection characteristics created by Mozi Botnet.

Author：Yanlong Ma，Lingming Tu，Genshen Ye，Hongda Liu When we talk about DDos botnet, we tend to think the typical scenario, some mediocre, code-borrowing scripts target old vulnerabilities. But things actually have