On October 27, 2021, our Botmon system ided an attacker attacking Edgewater Networks' devices via CVE-2017-6079 with a relatively unique mount file system command in its payload, which had our attention, and after analysis, we confirmed that this was a brand new botnet, and based on it's targeting of Edgewater producers and its Backdoor feature, we named it EwDoor.

The initial version of EwDoor used a multi-C2 redundancy mechanism, and we registered the second C2 domain, iunno.se, which gave us the opportunity to measure its size. Unfortunately EwDoor reconfigured its communication model after experiencing problems with the main C2 network failure, using BT tracker to downlink C2s, and in turn we lost sight of EwDoor. However, during this brief observation, we confirmed that the attacked devices were EdgeMarc Enterprise Session Border Controller, belonging to the telecom company AT&T, and that all 5.7k active victims that we saw durning the short time window were all geographically located in the US.

So far, the EwDoor in our view has undergone 3 versions of updates, and its main functions can be summarized into 2 main categories of DDoS attacks and Backdoor. Based on the attacked devices are telephone communication related, we presume that its main purpose is DDoS attacks, and gathering of sensitive information, such as call logs.

Given the size, activity of EwDoor, and sensitivity of the infected devices, we decided to write this paper to share our findings with the community.

We have captured a total of 3 versions of EwDoor, with version 0.16.0 as a blueprint, we can characterize EwDoor as, a botnet that sends C2 down through BT tracker, uses TLS to protect traffic, and mainly profits by means of DDoS attacks and sensitive data theft, which currently propagates through the Nday vulnerability CVE-2017-6079, mainly targeting EdgeMarc Enterprise Session Border Controller devices.

Its basic loigic is shown below. 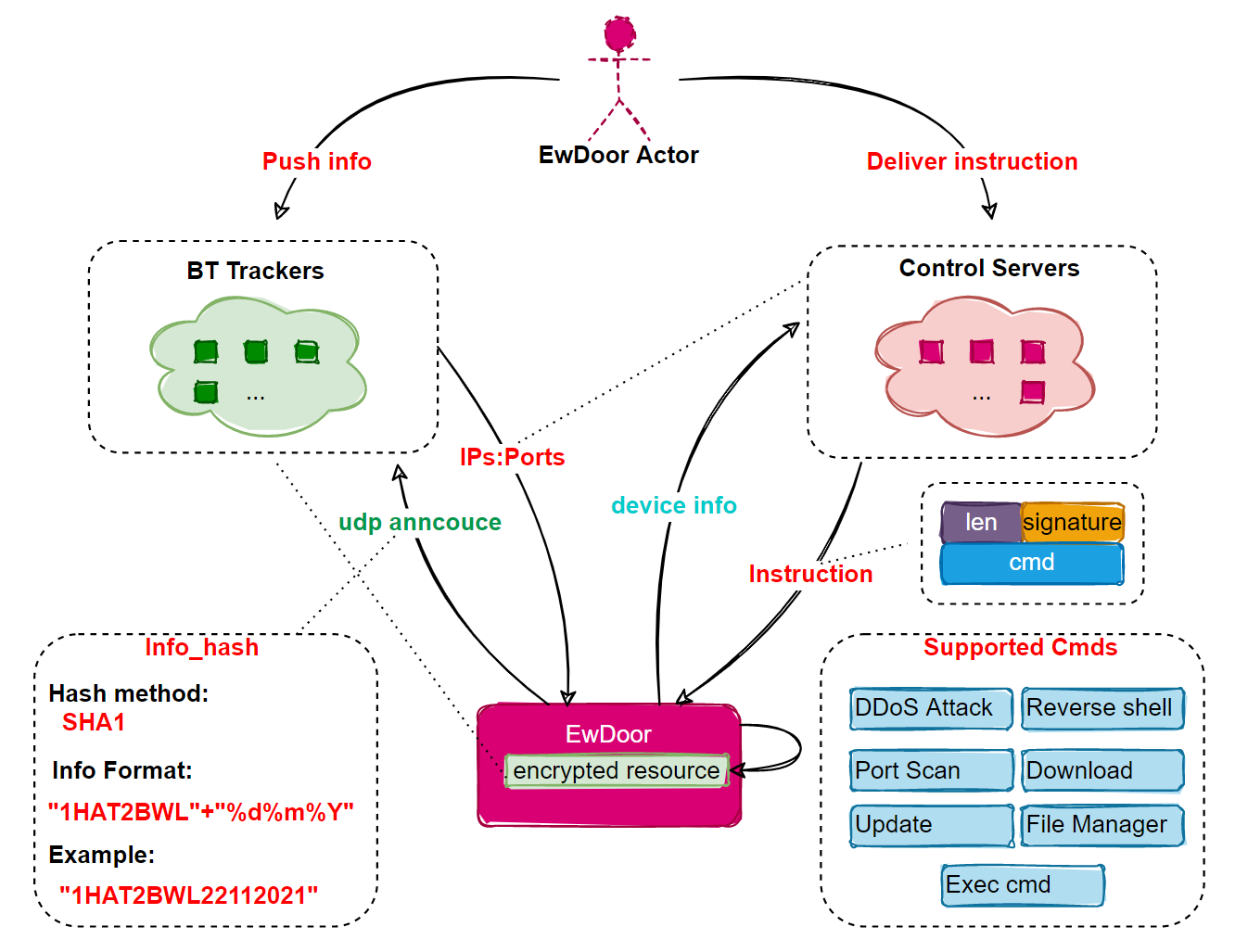 By grabbing the author's unregistered CC domain name, we were able to measure the size of this Botnet for a little while, when the active Bot IP was around 5.7k. The AS numbers of the infected device IPs were all AS7018|AT&T_Services,_Inc. (AT&T, an American telecom company). By back-checking the SSl certificates used by these devices, we found that there were about 100k IPs using the same SSl certificate. We are not sure how many devices corresponding to these IPs could be infected, but we can speculate that as they belong to the same class of devices the possible impact is real.

EwDoor's SHELL script is quite long, we extracted the key parts for analysis.

It is also worth mentioning that EwDoor samples are stored in the form of gzip on the download server, which to a certain extent escapes the security detection for binary files; the authors of earlier versions made the sample files into Linux rev 1.0 ext2 filesystem files and then used mount to mount the files on the system, which is probably another trick to protect itself.

The latest version of 0.16 was chosen as the main object of analysis, and its basic information is shown below.

Ewdoor uses dynamic linking, and although it adopts some anti-reverse techniques, there is not much difficulty in reversing it. In general, the function is relatively simple. When it runs on the infected device, it first collects device information, them performs soem common things such as single instance, persistence and other functions; then decrypts the bt tracker and obtains C2 by accessing the bt tracker; finally reports the collected device information to C2 and executes the commands issued by C2.

Now let’s analyze the implementation of EwDoor one by one from 3 aspects: safeguard, host behavior and network communication.

When Ewdoor runs, it will check the file name and parameters. When the file name is "/var/tmp/.mnt/ewupdate", it means that this is an update operation, and then it will copy itself to ewstat by the command cp -f /var/tmp/.mnt/ewupdate /var/tmp/.mnt/ewstat and then start the execution; when there are no start parameters, or the first start is not script, then the /etc/config/ew.conf script is executed via bash; only when the first boot data is script, the processing logic below is executed, which is in a way also a countermeasure to the sandbox/simulator.

Ewdoor implements single instance by means of a file lock, as shown below. 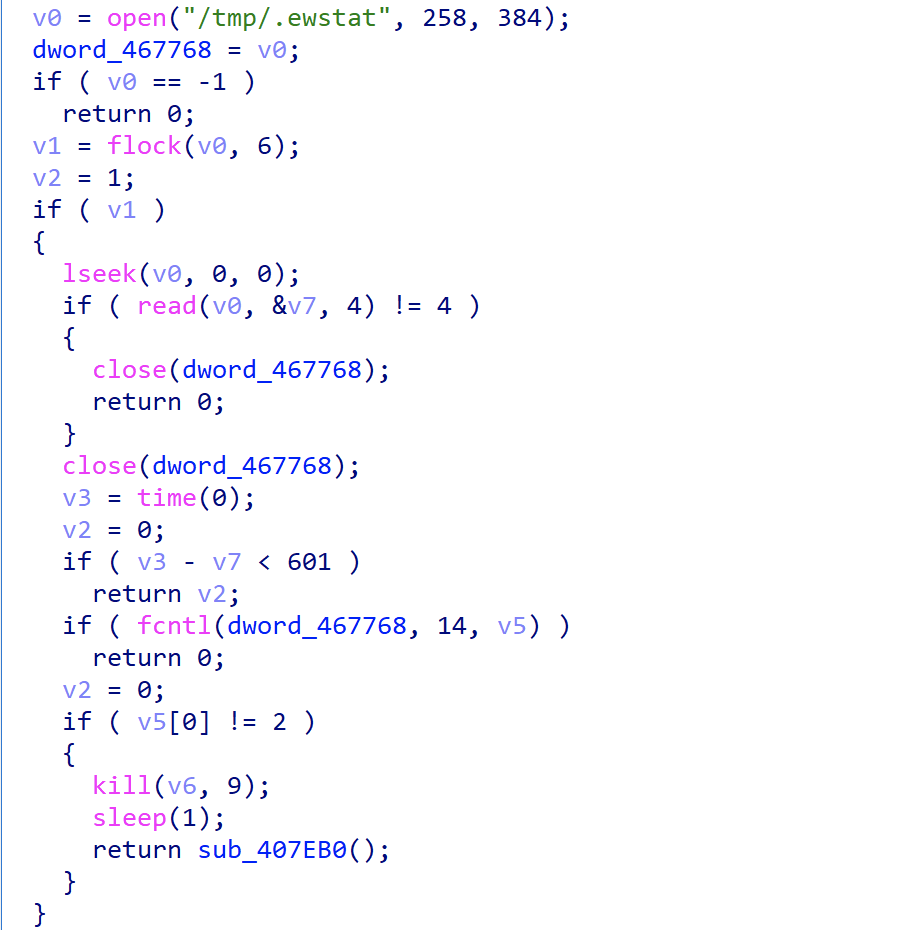 We can use /proc/locks to observe the process and corresponding lock files, and then execute the EwDoor, we can see that no new processes are created.

Ewdoor collects the hostname, NIC address, etc. of the compromised device for use later in the registration process.

Ewdoor periodically terminates the netflash process in the system with the following code. netflash command is a maintenance command used to update the system remotely. EwDoor achieves persistence by blocking the maintenance channel and then working with the crontab in the SHELL script.

Ewdoor stores the encrypted network related sensitive resources, such as registration information, C2, ports, etc. in the sample. Therefore, when bots want to communicate with C2, they have to decrypt this part of the resources first, then get the C2 either directly or indirectly, and then finally establish communication with the C2 and wait for the execution of the commands issued by the C2.

EwDoor decrypts sensitive information by using the "gstr" function, which is implemented as follows.

After reverse analysis, we wrote the following IDA script, through which we can decrypt all the resource information.

There are 62 items of encrypted resources, and the first 22 items after decryption are as follows.

The combination table built into the sample is shown below.

After the above decryption process, bots will directly get C2. take sample 5d653e9a5b1093ef8408c3884fbd9217 as an example, through the following IDA script, decrypt all encrypted resources.

The implementation of the bt_generate_daily_hash_and_port function is shown below, the specific logic is to format the current time as "%d%m%Y", then splice it with "1HAT2BWL", then calculate the SHA1 value of this string, and then calculate the last 2 bytes of SHA1 to get the port of C2.

In fact, the port calculated in the above step is not the real port value, it needs to add 10. The process is shown in the figure below.

The implementation of the bt_try_find_good_peers function is shown below. The specific logic is to send the above SHA1 value as infohash to the bt tracker, and get the C2:PORT through the Tracker UDP protocol. If the PORT is equal to the above port value, then this IP is the IP of C2. 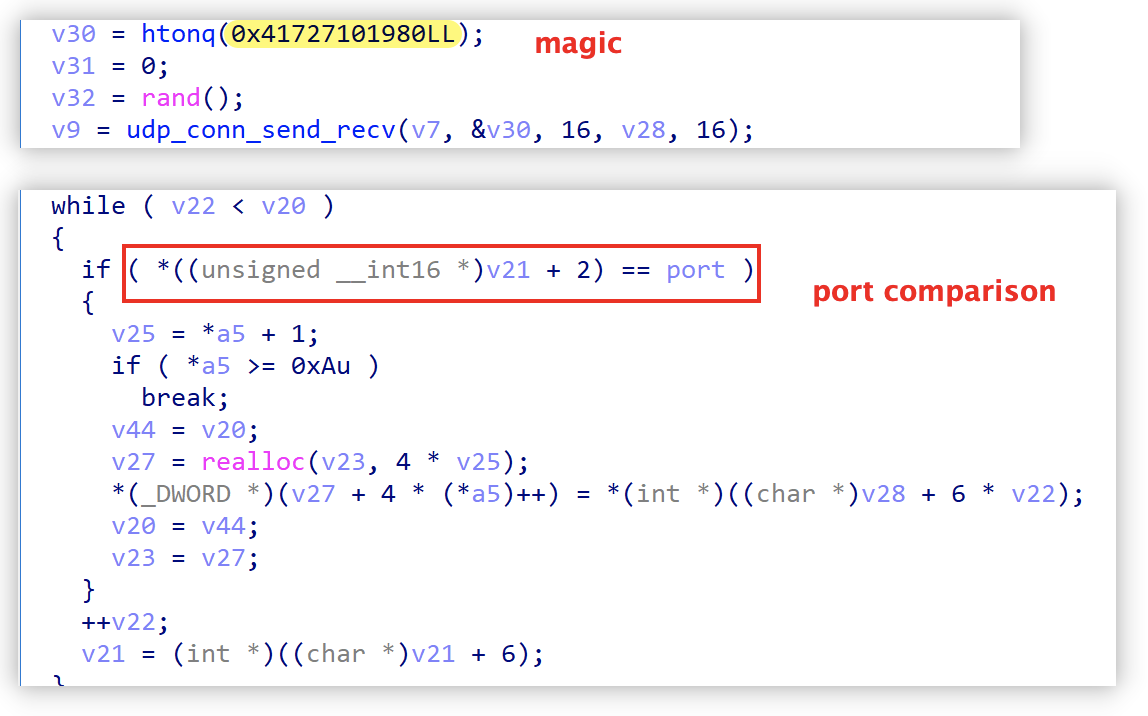 The following figure shows the network traffic generated on 2021.11.22 as an example.

The SHA1 value calculated above will be sent to BT tracker as infohash, and then compare the server port returned by BT tracker, we can see that there are 3 groups of ports are 0xcff6, choose any group to establish communication.

The actual network connection is as follows:

When Ewdoor successfully obtains C2, it first establishes a connection through TLS protocol, then sends the registration information to C2, and finally waits for the execution of the command sent by C2. In this process, according to the different versions, the communication protocols with C2 can be divided into the following two major categories.

The TLS connection itself is not worth talking about, but the interesting point is that in version 0.12, the author of EwDoor made a mistake. 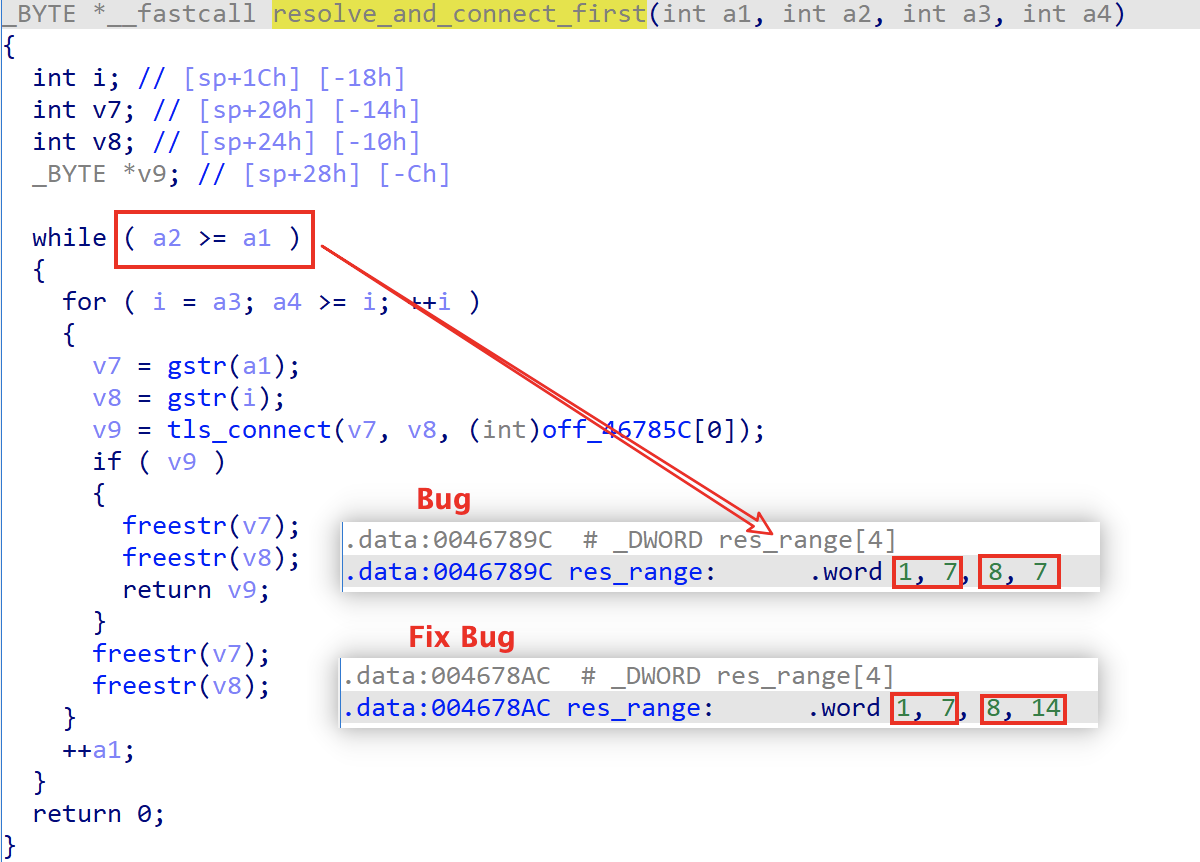 After successful registration with C2, Ewdoor waits for the execution of commands issued by C2. The commands supported by version 0.12 are shown in the following table.

The following code is used to construct the registration packet. The data includes the decrypted string from index 0, version number, device host name, device NIC address and other information. 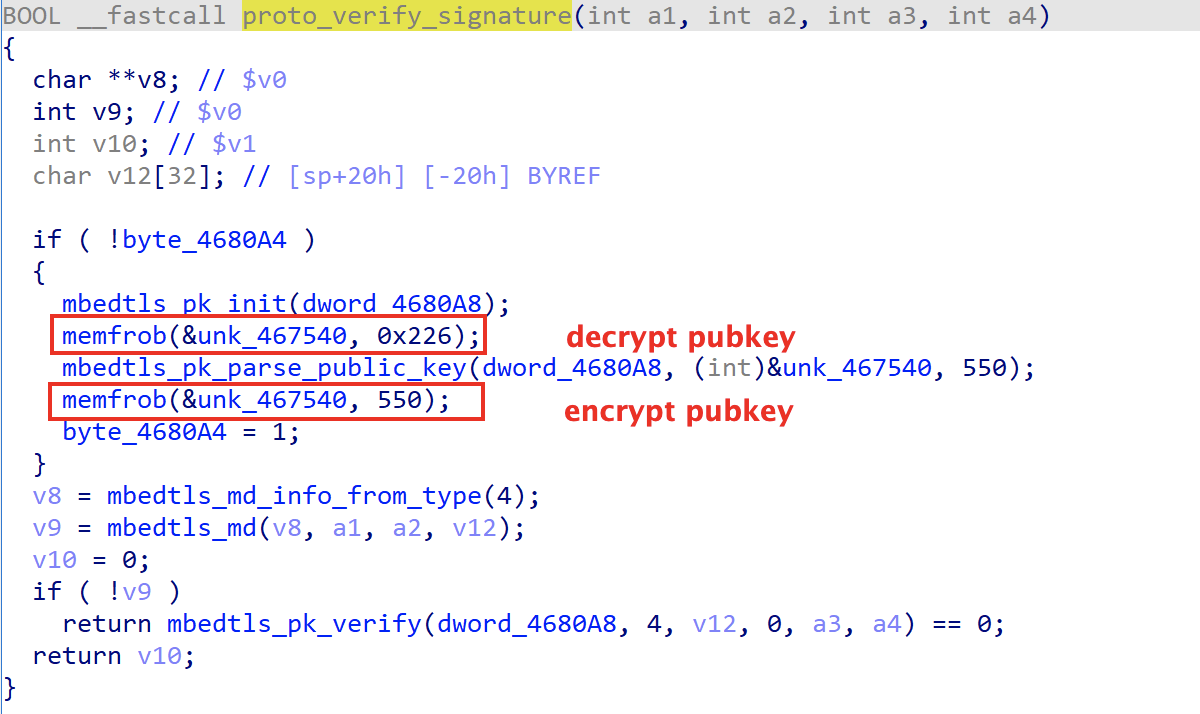 The pubkey is encrypted and stored in the sample, which is 550 bytes in total, and the real public key can be obtained after the 0x2a 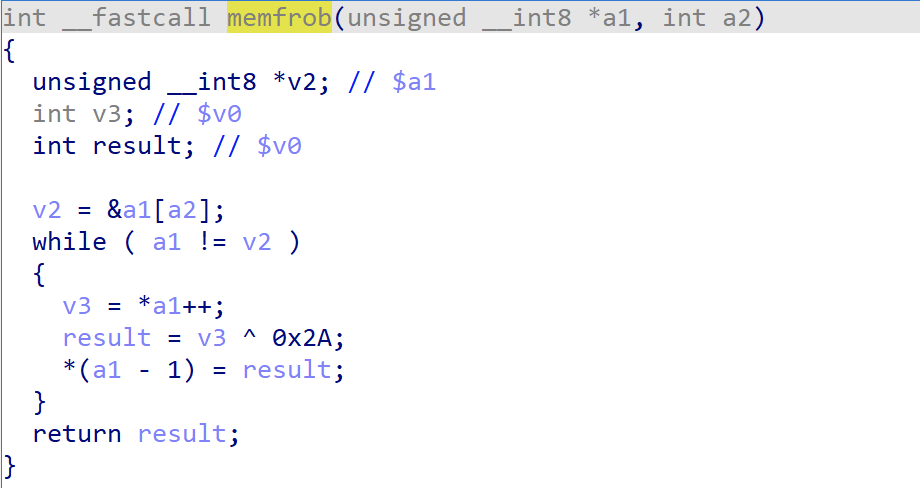 Take the payload received in practice as an example, it can be divided into 4 parts according to the format described above. 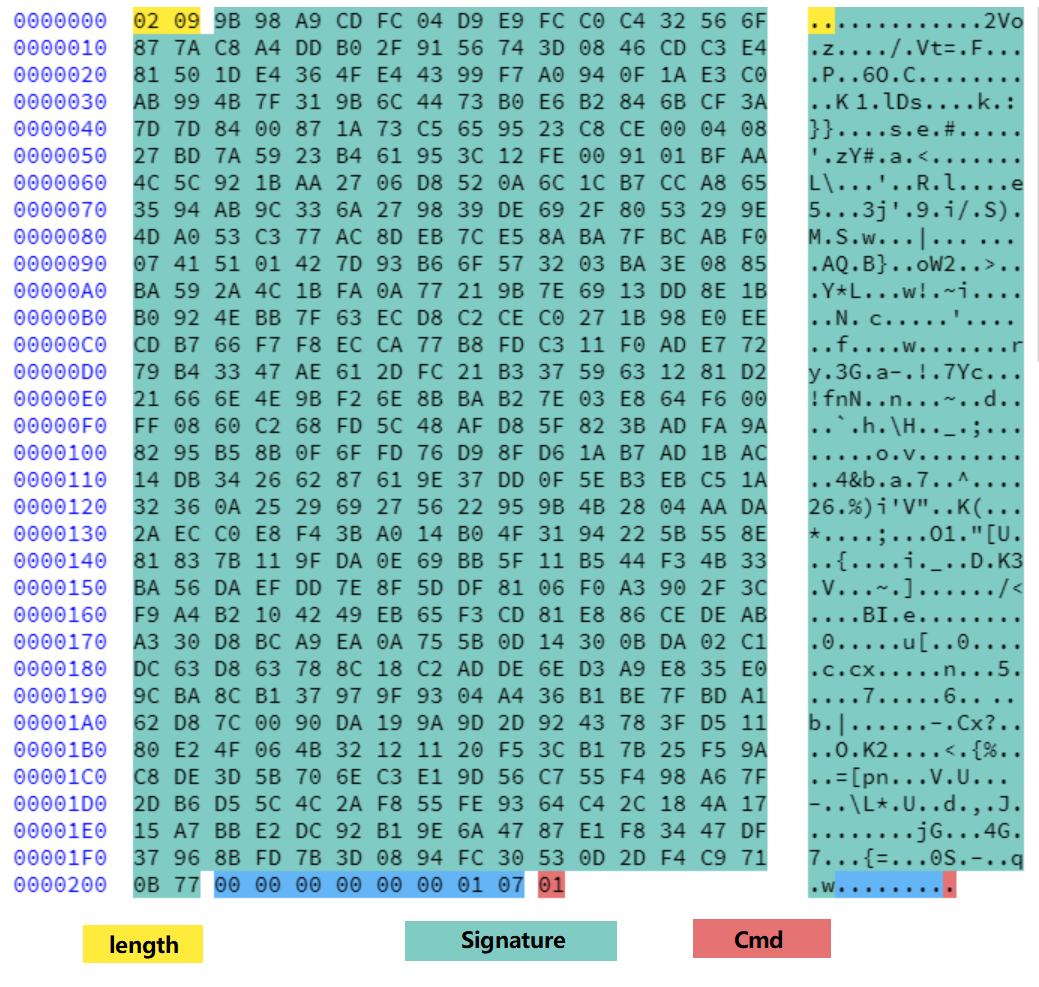 The above payload can be easily verified by the pk_verify tool that comes with mbedtls.

When the command passes the check, the specific command is just executed, here the command number is 1, which is the heartbeat command.

The commands supported by version 0.15, 0.16 are shown in the following table.