With our DDoSMon, we are able to perform continuous and near real-time monitoring on global DDoS attacks. For quite a long time, DNS, NTP, CharGen and SSDP have been the most frequently abused services in DDoS reflection amplification attacks. They rank respectively 1st, 2nd, 3rd and 4th in the last 365 days.

Recently, we noticed that CLDAP-based reflection amplification attacks (hereinafter referred to as CLDAP attack) have surpassed SSDP and CharGEN as the third biggest reflective DDoS attack vector. The figures below display the percentage of CLDAP attacks in the last 365 and 90 days among all reflective amplification DDoS attacks:

(Source: DDoSMon. The Insight web page on this site covers most of the data in this blog.)

CLDAP attack first appeared in the end of October last year, just a year ago. In this blog, we look at the rise of the CLDAP attack:

Our DRDoS data feed at our OpenData page maintain a list of top reflector IPs being used in the last 30 days, security researchers can contact netlab@360.cn to apply for free feed download.

We can divide CLDAP attack activity into three stages:

From the above statistics, you can see that CLDAP has become one of the workhorses in DDoS attack.

We also extracted all the LDAP reflector IPs that had been used in ddos attacks, did a month to month comparison, and generated the following diagram.
From the diagram, you can tell that the overlap rate of CLDAP ips has been going up and getting stable at around 40%.

In all attacks involving CLDAP, over 84% are CLDAP only, with no other combined attacking vector. There are also some other combinations, which be seen as below. 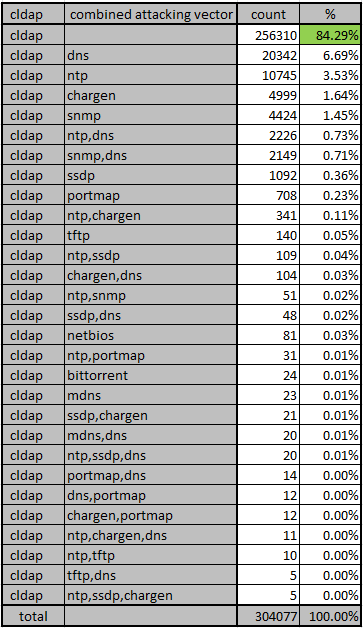 The duration of CLDAP attack varies: the shortest attack was less than 1 minute, and the longest one lasted more than 3 days. As shown in the figure below, the attack time span at 1, 2 and 3 standard deviations (68%, 95%, 99.7%) are respectively 30 minutes, 10 hours and 24 hours. 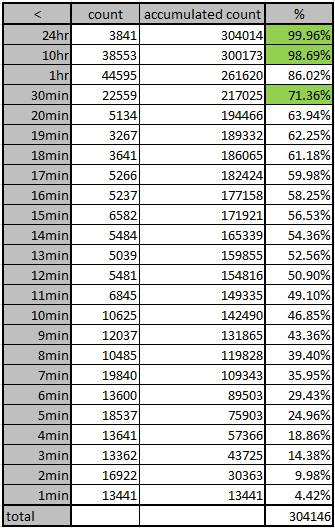 The distribution of the victim's destination port is shown in the following table: 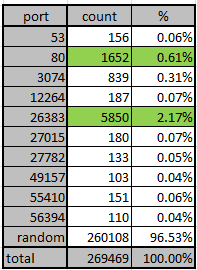 Here is a quick follow up post regarding to our initial blog. IoT_reaper Sample History The historical delivery of the IoT_reaper samples we observed through our honeypot are as follow: It